Relationship between a logistic decision function and Gaussian Noise

Imagine an experiment, in which an observer has to discriminate between two stimulus categories at different contrast levels $|x|$. As $|x|$ becomes lower, the observer will be more prone to making perceptual mistakes. The stimulus category is coded in the sign of $x$. I'm interested in the relationship between two different ways of modeling the observer's "perceptual noise" based on their choices in a series of stimulus presentations.

The first way would be to fit a logistic function

where $p_1(x)$ is the probability to choose the stimulus category with positive signs ($S^+$). Here, $\beta$ would reflect the degree of perceptual noise.

A second way would be to assume that the observer has Gaussian Noise $\mathcal{N}(0,\sigma)$ around each observation of $x$ and then compute the probability to choose $S^+$ by means of the cumulative probability density function as follows:

In this case, $\sigma$ would be an estimate of the perceptual noise.

I have a hunch that both these approaches are intimately related, but I'm not sure how. Is it an underlying assumption of the logistic function that the noise is normally distributed? Is there a formula that describes the relationship between $\beta$ of $p_1(x)$ and $\sigma$ of $p_2(x)$? Are, in the end, $p_1(x)$ and $p_2(x)$ essentially identical and could $p_1$ be derived from $p_2$?

They are not intimately related per se, i.e., one cannot naturally get from the sigmoid to the probit or vice-versa. However, the probit function can be used as an approximation to the sigmoid function. In fact, the two functions are closest, around $x=0$, when $p_1(x)$ is approximated by $p_2$ as $p_2\left(\sqrt{\frac{\pi}{8}}x\right)$. 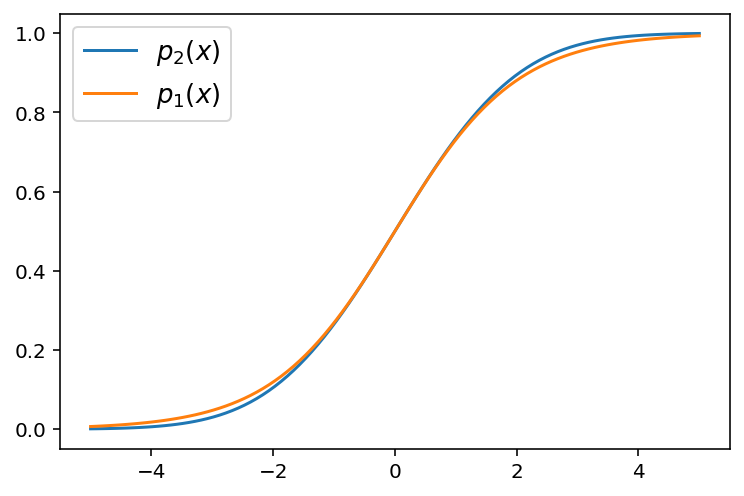 This is useful, for instance, in the context of bayesian logistic regresion, where we are required to solve an integral of the form

Using the sigmoid function $p_1(x)$ makes the integral intractable, but we can make a variational approximation to the integral considering $p_2\left(\sqrt{\frac{\pi}{8}}x\right)$, which turns the problem into a convolution of Gaussians, hence, it has a closed-form solution.

Not the answer you're looking for? Browse other questions tagged distributions logistic normal-distribution density-function model or ask your own question.

361
Difference between logit and probit models
5
How is Logistic Regression related to Logistic Distribution?