Multiple Regression: Two Binary ind. vars. - Can an interaction term be significant, when the main effects are not?

I think this is a simple question, but I'm having difficulty coming up with a test or example for this.

Consider lm(A ~ B*C, data=D) where A is continuous; B and C are Binary; and the assumptions of linear regression are met.

By situation, I mean realistic populations that give this effect. This means that repeated sampling would predominantly produce this result -- B:C is significant at p=0.05, and both B and C are not. Thus, solutions that play with just crossing the p = 0.05 boundary to get limited "success" a fraction fo the time, or use very small samples, or are based on the degrees of freedom are excluded.

The answer does not have to be coming up with such real-world populations (although that would be great) - a simulation is fine. I find this easy if one factor has 3 levels, but I'm not yet finding a solution for this 2x2 situation.

For intuition, consider that the $F$ test assesses whether all three variables B, C, and the interaction B:C collectively "explain" the variance of the response, whereas the t-test for any single coefficient considers only that coefficient (after the effects of the other coefficients have been accounted for). The F-test has to account for the presence of B and C along with B:C (and does so by having $3,$ rather than $1,$ numerator degrees of freedom). Therefore, when the true coefficients of B and C are relatively small, it ought to be possible for the situation you describe to hold. In fact, this might even be fairly common.

The intuition suggests a stupid but effective search for an example: create a small dataset with B, C, and B:C variables; use a model in which the only nonzero coefficient is the interaction; add some Gaussian noise; and see what happens. Make a few trials with different variances for the errors, looking for a situation where the p-values aren't extreme: neither very tiny nor too close to $1.$ Then simply keep adding different noise terms to the model until you get an example.

On the third try I found this one with eight (balanced) observations.

There's nothing strange about the data: you can run the code below and plot diagnostics of the model if you like (plot(fit)); they look fine.

Here are the details of the search, performed with R.

This can occur with a disordinal interaction, AKA a cross-over interaction.

This answer below covers the case where the variables aren't actually "interacting," as the four groups are simple randomly drawn normal distributions, but the interaction term is very significant.

The answer also covers the case of a hypothetical real-world interaction, as it's theoretically possible that a real interaction between B and C could produce this result. 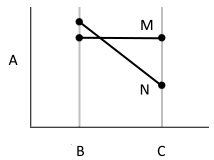 Using the definition of a disordinal interaction, I wrote a script to do a search for a general case that gives B:C being significant, and both B and C being non-significant. (I started with an arbitrary mean of 290, SD of 40.)

This post set me in the right direction: https://www.theanalysisfactor.com/interactions-main-effects-not-significant/

Not the answer you're looking for? Browse other questions tagged regression multiple-regression t-test linear f-test or ask your own question.