Consider the following joint distribution for the random variables $A$ and $B$:

thank you! (and apologies for the maybe "naive" question)

can we say that A causes B?

No, this is (presumably) a simple observational study. To infer causation it is necessary (but not necessarily sufficient) to conduct an experiment or a controlled trial.

Edit: To address one of the points in the comments:

But now I wonder: can there ever be causation without correlation?

Yes. This can happen in a number of ways. One of the easiest to demonstrate is where the causal relation is not linear. For example:

Clearly Y is caused by X, yet the correlation is zero.

Simple Example: I am going to use directed acyclic graphs (DAGs) since they graphically encode the assumptions. Let's focus on three variables: $A$, $B$, and $U$ (you can extend this to more, but the basic concepts remain the same). $U$ is some variable we did not have the opportunity to collect. Each arrow in the DAG indicates a causal relationship, with the direction of the arrow indicating what causes what. For three variables (and the ordering restriction), following are some possible DAGs that will result in a correlation between $A$ and $B$: 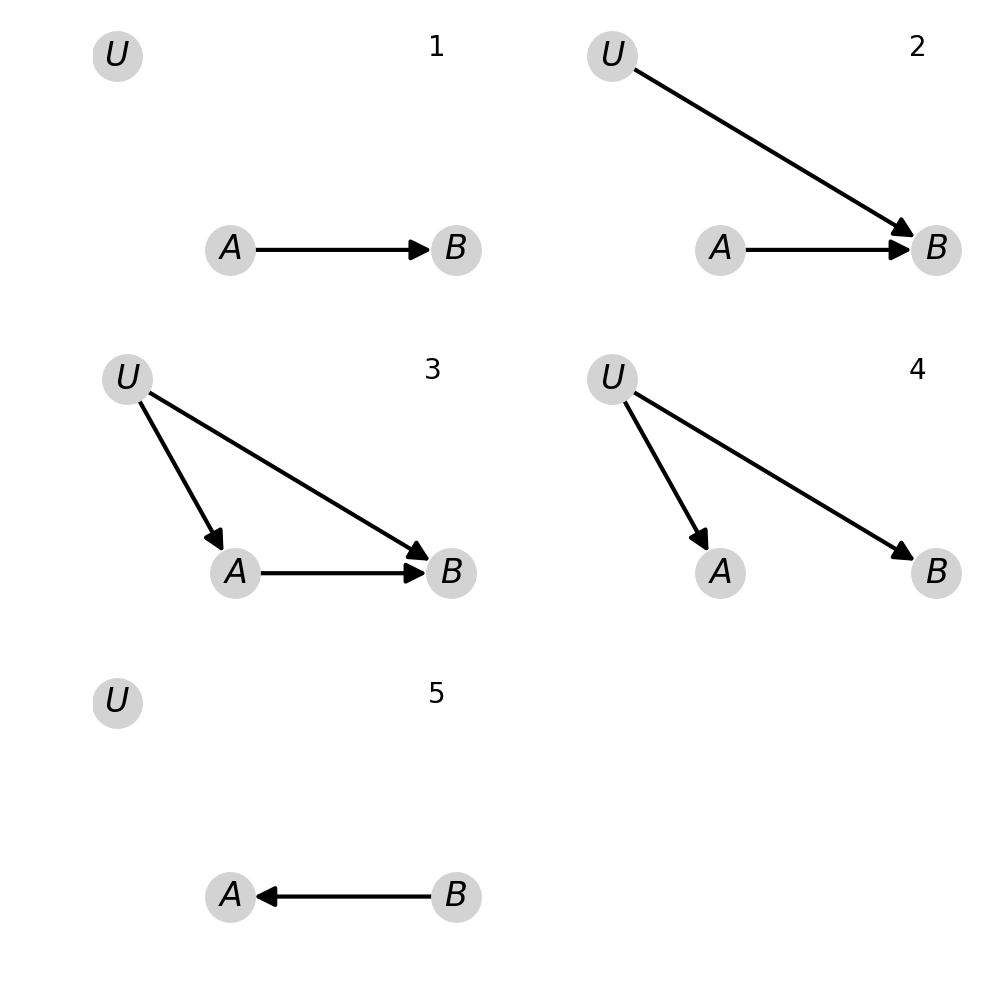 Correlation is causation in only DAGs numbered 1, 2, and 3; which requires appealing to outside knowledge (although 3 is tricky since $U$ being a common cause of both $A$ and $B$ can flip the relationship from the true causal direction, e.g. $A$ is protective from $B$ in reality but $U$ makes it look harmful).

Aside: As to my example of a scenario with causation but no correlation, DAGs are assumed to be faithful. This basically means that there are no perfect cancellations that occur (all the individual causal effects don't cancel out perfectly to result in no average causal effect). Because of this, it is a little trickier to claim that no correlation means no causation.

No, you cannot say A causes B. The table you have only describes associations between A and B. Even if you know A accurately predicted B a large percentage of the time , that does not imply that A causes B. It may in fact, be that A causes some other, confounding variable C to occur that is highly correlated with B.

Not the answer you're looking for? Browse other questions tagged causality multivariate-distribution or ask your own question.

146
Does causation imply correlation?
5
Causation implication
8
Causal identification and penalized splines
1
Reverse Causation
4
regression and causation
0
Measuring causation
0
If unconfoundedness holds under a set of covariates $X$, will it also hold on an extended set of covariates, $(X,X')$?
12
is it always "no causation without manipulation"?
3
Causal inference for multiple treatments with an observed set of properties