If the predicted value of machine learning method is E(y | x), why bother with different cost functions for y | x?

It is well known that the mean E(Y |X) minimizes the Root Mean Square Error (RMSE).

However, often this theoretical mean is unknown and we use an estimate instead. Or we want to minimize something else than the mean squared error. In those cases you often need to use assumptions about the distribution of the errors in order to determine which estimator to use (to determine which one is optimal).

So a typical situation is

The situation that you sketch makes a shortcut to the final point and assumes that we know the population. This is very often not the case. (It can still be a practical case, for instance if we have so much information, a large sample, such that we can estimate the population distribution with high accuracy and the biggest error in the prediction is due to the randomness in the population)

If the predicted value of machine learning method is $E(y | x)$, why bother with different cost functions for $ y | x$? 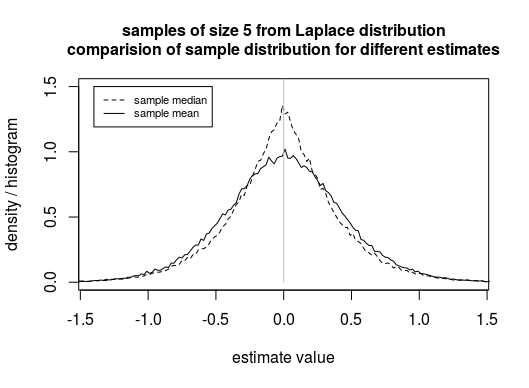 Image: showcase that the sample median can be a better estimator than the sample mean. Note that the distribution is more concentrated around the true location parameter (in this example this is 0).

So based on the assumption that the errors are Laplace distributed we should decide to use the sample median as an estimator and predictor, and not the sample mean.

Another underlying issue is about the differences in cost functions.

In the previous example with the Laplace distribution, the objective might be to minimize the expected mean squared error of the estimate/prediction. But, we find the estimate that optimizes this objective by minimising the mean absolute error of the residuals.

A related question is: Could a mismatch between loss functions used for fitting vs. tuning parameter selection be justified? In that question you minimize the (objective) cost function by cross validation, but in the answer it is demonstrated that it is still good to perform the fitting (during training) by means of a cost function that relates to the distribution of the error of the measurements.

quote from the chat

"My question had to do with how to choose one estimator or another one (i.e. one loss function over another one)"

E.g. the distribution of errors for estimator X and Y might be (a simplistic example)

R-code to create the graph

Say we know that Y follows a distribution with density f.

If that statement is true, you would not want to try different distributional assumptions. If it is not true, then you should consider modeling different assumptions because it can have a substantial impact on your results.

why even bother with different cost functions like the negative log-likelihood?

Because we should be using our true loss function. Unfortunately, the training most people get doesn't really give them a way to really parse through the issues with varying the loss function.

Let me give you a real-world problem. Some things must be purchases such that $x\ge{k}$ where $k$ is an unknown constant. If $x<k$ then one hundred percent of the material purchased is unusable and must be destroyed. You must then begin again.

If you purchase $x>k$ then $x-k$ must be destroyed and is a loss.

On either side, the loss per unit is the waste times $c$.

Minimizing quadratic loss would imply you should take catastrophic losses fifty percent of the time. The expectation is a disaster.

Solutions to real world problems can be markedly suboptimal if you use the RMSE as your objective function.

The answer is simpler than it seems. Though the sample mean in the simplest case, or least squares estimates in the multivariable predictor case provide unbiased estimates of the long-run mean, these estimates can be wrong or highly inefficient. In the case of a simple mean, i.e., when there are no predictors X, if the sample comes from a log-normal distribution the sample mean on the original scale is a terrible estimate of E(Y). The best estimator is a function of the mean and standard deviation after taking logs. In the multivariable situation, a least squares estimate of E(Y|X) provides unbiased estimates of the mean if the model structure is correctly specified for the right hand side of the model, but the estimates of E(Y|X) as a function of X can be wrong for every observation in the sense that all the regression coefficients are wrong even though they "add up" to something that is right. If Y|X has a lognormal distribution, for example, and you did not take log(Y) when computing least squares estimates, you will get bad predictions when you examine the predictions in an X-specific manner.

Not the answer you're looking for? Browse other questions tagged regression distributions expected-value loss-functions or ask your own question.

5
Estimator that is optimal under all sensible loss (evaluation) functions
3
Could a mismatch between loss functions used for fitting vs. tuning parameter selection be justified?

13
Derivation of Regularized Linear Regression Cost Function per Coursera Machine Learning Course
10
Model fitting vs minimizing expected risk
4
MLE as an expectation over the empirical distribution
1
Why does logistic regression with a logarithmic cost function converge to the optimal classification?
3
In supervised learning, why maximize the joint likelihood when we are interested in maximizing individual likelihood?
0
What family is the posterior predictive distribution in when the likelihood is a Bernoulli and the prior (and posterior) is Gaussian?
5
Loss function in for gamma objective function in regression in XGBoost?
1
Relationship between log-likelihood function and entropy (instead of cross-entropy)