DAG: no back-door paths but background information shows a need for adjusting

I am interested in the effect of town of residence on income.

Though the DAG has many arrows, it's interpretation is actually very simple: 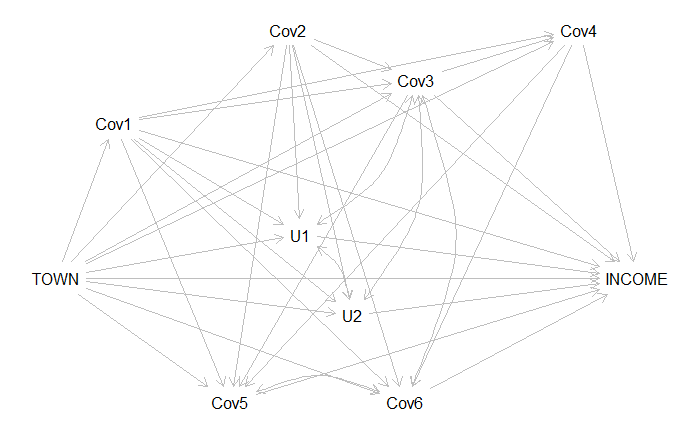 However, I do know that subjects in different towns are different. According to other evidence and my study data, there are differences in the 6 covariates I have. Thus, this says to me that adjusting is neccessary.

Therefore, back-door criterion should be used in this case. I should use disjunctive cause criterion (adjust everything that you have until you do not open any new back-door paths). However, daggity package does not have such option. It only has an option to use Judea Pearl's single-door criterion.

What is the difference between disjunctive cause criterion and Pearl's single door criterion?

And if I have the aforementioned background knowledge, is it reasonable to adjust for all available six covariates?

What is the difference between disjunctive cause criterion and Pearl's single door criterion?

The Single Door Criterion establishes conditions under which a causal bath between two variables, say $X \rightarrow Y$, will be consistently estimated by the regression coefficient for $X$ in a multivariable regression model for the response $Y$. Breifly, it stipulates that, for a set of variables containing various paths between them and being acyclic (ie, it's a DAG), then a subset of these variables, $Z$, will be sufficient provided that

This leads to the familiar "rules" that we should condition on confounders (ie backdoor adjustment), but not mediators.

It also leads to "front door adjustment", where we are able to estimate the causal effect of $X$ on $Y$ in $X \rightarrow M \rightarrow Y$ even in the presence of unmeasured confounding.

The Disjunctive Cause Criterion (VanderWeele, 2019), is actually very similar to backdoor adjustment, but tries to avoid having to explicitly identify confounders, and instead seeks to adjust for variables that are causes of either the main exposure or the outcome (or indeed both), but excluding instrumental variables. However, I say "tries to", because there is still a need to include confounders:

The problem with this approach is two-fold. First it can lead to "over-adjustment", that is, unlike Pearl's theory, it can not, except by accident, lead to a "minimally sufficient" set of covariates, so in general it will not result in a parsimonious model and could suffer from problems due to high correlations between covariates. Second, it can lead to the inclusion of mediators, which VanderWeele acknowledges would be a problem.

And if I have the aforementioned background knowledge, is it reasonable to adjust for all available six covariates?

No, I don't think this is appropriate. All 6 observed variables appear to be confounders for the causal effect of TOWN on INCOME and should not be adjusted for. This is precisely an example of the second problem with this technique, mentioned in my last paragraph. See this answer for details and examples of what can go wrong if you do adjust for mediators:

Without further details of your research question, study, and data it is difficult to advise further, but you might want to look into a multilevel structural equation model with random effects for town, although if TOWN is your main exposure this probably wouldn't be the way to go, but some kind of SEM could be worth looking at. I would suggest asking a new question about how to proceed further.

Not the answer you're looking for? Browse other questions tagged causality mediation confounding dag causal-diagram or ask your own question.

36
How do DAGs help to reduce bias in causal inference?

6
What justifies adjusting for proxy variables in the DAG causal inference framework?
8
How can I proceed when causal directions are not that clear? An example is provided
0
DAG: are there situations where adjusting for mediators is reasonable?