I’ve been presented with the following chain of reasoning.

I sense that this can’t be correct in general, because playing around in R it seems like the p-value only comes out as 0.5 when $d_1 = d_2$.

Suppose a one-way ANOVA has three levels of the factor, and that the three levels are from exactly the same normal distribution. So if each level has 20 replications, the data for the three levels can be sampled (simulated) as shown below. I'll use oneway.test to do the ANOVA because it is simplest to use.

For these particular data $F = 0.78 \ne 1,$ and the P-value, about $0.47,$ far too large for the null hypothesis to be rejected. (Failing to reject is the correct decision because all three groups are from exactly the same distribution.) Also, the P-value is not far from your speculated value $0.5.$

The mean P-value is about $0.5$ as you suggested. But more precisely, the distribution of the $100\,000$ P-values is nearly standard uniform.

Note: To be absolutely honest, maybe the distribution of the P-value here not exactly standard uniform here. The procedure oneway.test uses an approximate test statistic.

This ANOVA does not require group variances to be equal and the F-statistic is slightly altered to allow for differences among group sample variances. The alteration is relatively small here because the groups have equal population variances.

There is more than one type of ANOVA test, the one I will use to try and provide insight about this question is the F-test applied to linear regression where the null hypothesis is that all of the regressors equal zero.

I present some further discussion, which will be overly basic for some viewers of this site, but which was helpful for convincing my interlocutor that something had indeed gone wrong at point ‘3’.

I have pasted below some R code which generates a plot of the empirical distribution of randomly sampled $F$-values in an ANOVA scenario when there are $3$ groups of $30$ subjects (i.e. $d_1=2,d_2=87)$, and the null hypothesis is true. 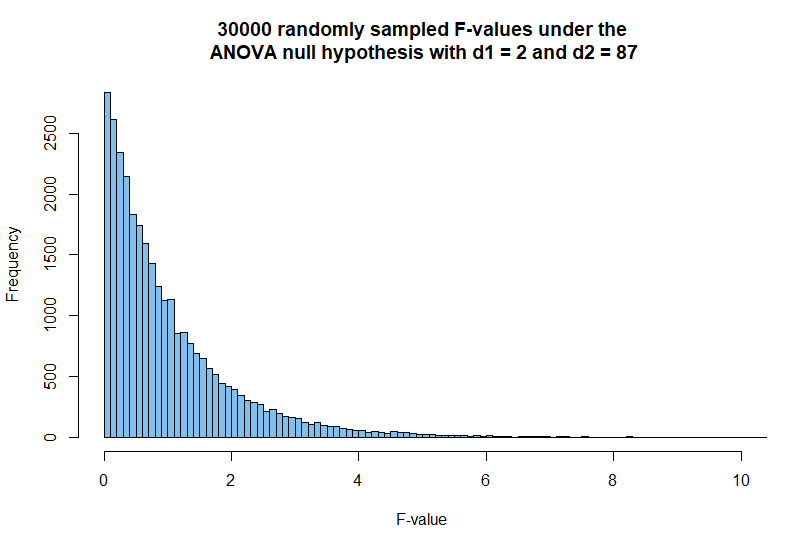 It’s easy to see that this closely matches the theoretical distribution of $F$-values. 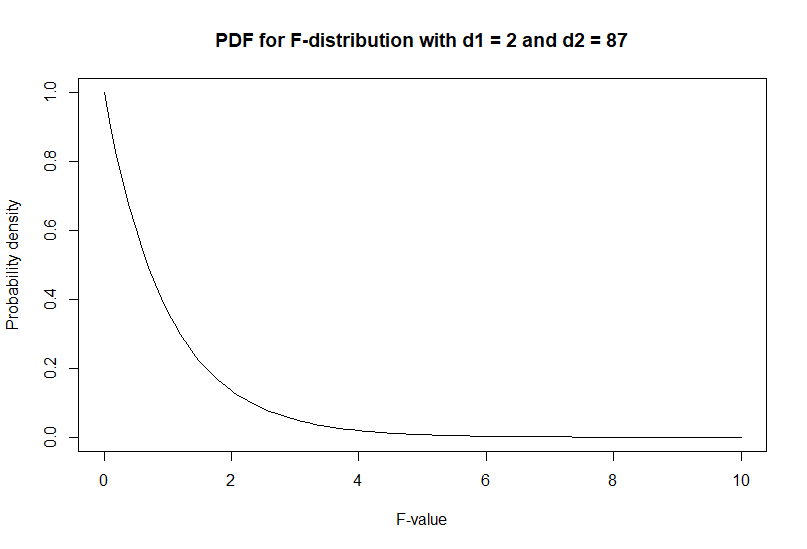 Not the answer you're looking for? Browse other questions tagged anova p-value f-test f-distribution or ask your own question.

7
Why do we take the absolute value in a hypothesis test?
6
Is the p-value equivalent to the false alarm value in the Bayesian rule?
13
If the distribution of test statistic is bimodal, does p-value mean anything?
1
Confusion regarding p-values and false discovery rate
3
Why are p-values probabilities rather than likelihoods?
7
Understanding how to find more "extreme" values when calculating p values in two sided hypothesis tests