Why do we need to triangulate a convex polygon in order to sample uniformly from it?

Suppose I want to uniformly sample points inside a convex polygon.

One of the most common approaches described here and on the internet in general consists in triangulation of the polygon and generate uniformly random points inside each triangles using different schemes.

The one I find most practical is to generate exponential distributions from uniform ones taking -log(U) for instance and normalizing the sum to one.

Within Matlab, we would have this code to sample uniformly inside a triangle:

And this works just fine: 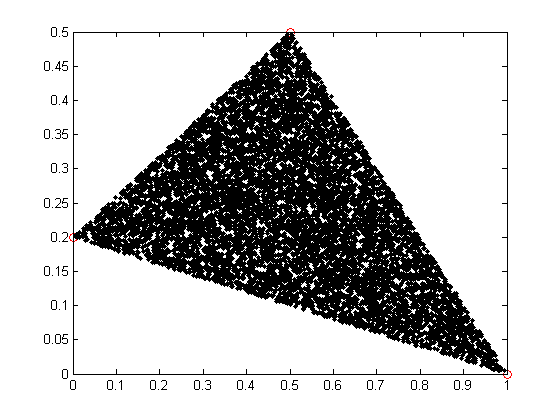 However, using the exact same scheme for anything other than a triangle just fails. For instance for a quadrilateral, we get the following result: 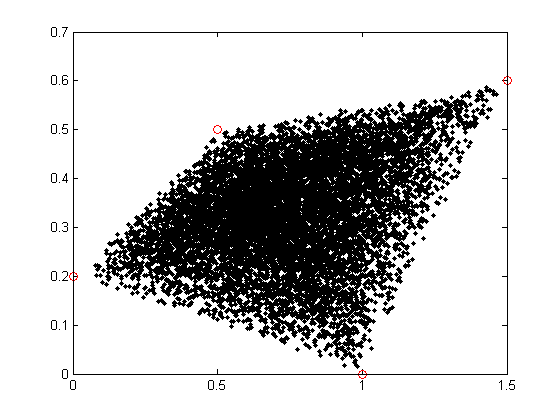 Clearly, sampling is not uniform anymore and the more vertices you add, the more difficult it is to "reach" the corners.

If I triangulate the polygon first then uniform sampling in each triangle is easy and obviously gets the job done.

But why? Why is it necessary to triangulate first?

Which specific property have triangle (and simplexes in general since this behaviour seems to extend to n-dimensional constructions) that makes it work for them and not for the other polygons?

I would be grateful if someone could give me an intuitive explanation of the phenomena or just point to some reference that could help me understand what is going on.

43
Fake uniform random numbers: More evenly distributed than true uniform data
7
How to generate random points in the volume of a sphere with uniform nearest neighbour distances
0
Algorithm for uniform sampling with bounded replacement
4
How to sample uniformly from 2-dim region with sinusoidal shape
7
Can't understand why rejection sampling works
3
A data-independant transformation to discretize a range of values non-uniformly
0
Sample unique elements from an array containing repeated values