Mixture of non-normals is normal?

(Comment: It is the marginal distribution of the residuals that is most often used to check the normality assumption.)

I can show you all examples, not just the simple ones.

Here they are, schematically: 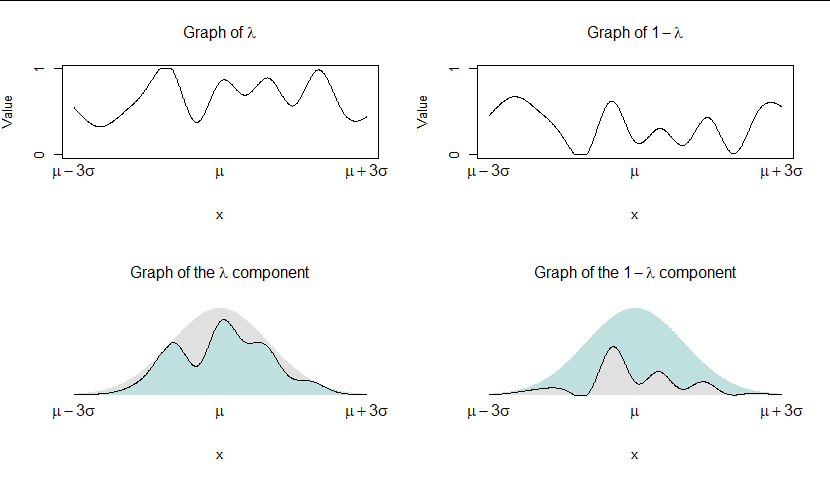 The bottom panels show how the density function $f$ of a distribution $F$ is split into two parts vertically along a nearly arbitrary curve. The cyan portion of the split is a fraction $\lambda$ of $f;$ the upper left plots its graph. The remaining portion (gray) therefore is a fraction $1-\lambda$ of $f$ whose graph is plotted in the upper right. This is how all mixtures arise.

(Notice that little is assumed about the density $f$ except that it exists.)

The mixture distribution $F$ is Normal, which means there is a mean $\mu$ and variance $\sigma^2$ for which $F$ has a density function $f(z;\mu,\sigma).$ The details of $f$ don't matter!

Let $\lambda:\mathbb{R}\to[0,1]$ be any (measurable) non-negative function. This means the following integrals involving $\lambda$ are defined and non-negative:

(The first inequality is an easy special case of Holder's Inequality.)

It is straightforward to establish that these are distribution functions and, by construction,

exhibits the original normal distribution as a mixture of these two.

Conversely, whenever there exist differentiable functions with property $(*),$ then a version of $\lambda$ can be recovered via

Finally, it is possible for the component distributions to be Normal: for instance, when $\lambda$ is a constant function that will be the case. That is the only possibility, though: see https://stats.stackexchange.com/a/429877/919 for the proof.

As requested in comments, it would be of interest to choose $\lambda$ to meet a set of criteria, such as

Although there are many solutions to these equations, one simple (striking) solution is obtained by supposing $\lambda$ and $1-\lambda$ are both simple functions: that is, piecewise constant. By making $\lambda$ symmetric around $0$ we can assure that (2) holds. The simplest of such simple functions is zero except on some positive interval $[a,b]$ and its negative $[-b,-a],$ where it equals $1.$

(where $\Phi$ is the standard Normal distribution function) and

That leaves us to solve (3) for $a \ge 0$. Here is an R implementation to illustrate:

Although separately neither group of residuals appears Normal, they are both centered at zero, have nearly the same variance, and collectively look perfectly Normal.

Not the answer you're looking for? Browse other questions tagged regression distributions conditional-probability residuals or ask your own question.

131
What if residuals are normally distributed, but y is not?
50
Normality of dependent variable = normality of residuals?
11
Regression: why test normality of overall residuals, instead of residuals conditional on $\hat{y}$?
6
In linear regression, if the random error is N(0,$\sigma^2$) does this mean Y~N($\alpha + \beta X$, $\sigma^2$)
6
Suppose $X$ follows a normal mixture. In which cases is $X$ itself normally distributed?
1
In a regression model fitting, should we should check for the normality of the response at each level of X, but not collectively for X?

6
From Marginal Exp-Norm Distributions to What Conditionals and Joint?
4
Is the distribution of the minimum of two other distributions a mixture distribution? Or is there a better term?
3
Regression function of "non-regressible" data
0
Equivalent way of rewriting a two-component mixture
5
Conditional log-concavity and unimodality