Use bootstrap mean to remove bias from the statistic?

I have a data sample on which I apply a statistic called "$\alpha$". I then use a standard bootstrap analysis on the data which results in something like this: 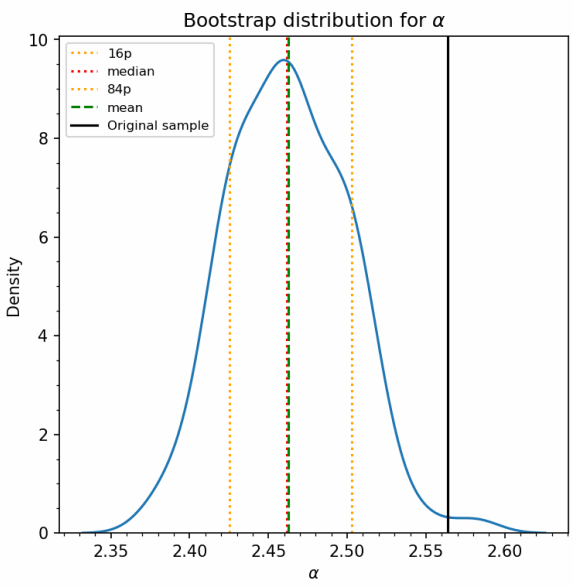 As can be seen, the bootstrap mean (green dashed line) is very much shifted with respect to the statistic applied on the original data (black solid line). This answer provided by whuber shares some light on this issue (emphasis added):

My question is: how do I "adjust the original statistic to remove the bias"?

This answer shows how to estimate the bias-corrected and accelerated bootstrap interval, but there's no mention of "adjusting" the original statistic. This SAS post also discusses the BCa but again, only the interval is discussed.

Estimating the bias of a statistic was, as I recall, one of the original motivations for developing the bootstrap. Keep in mind the bootstrap principle:

The basic idea of bootstrapping is that inference about a population from sample data (sample → population) can be modelled by resampling the sample data and performing inference about a sample from resampled data (resampled → sample). As the population is unknown, the true error in a sample statistic against its population value is unknown. In bootstrap-resamples, the 'population' is in fact the sample, and this is known; hence the quality of inference of the 'true' sample from resampled data (resampled → sample) is measurable.

Not the answer you're looking for? Browse other questions tagged confidence-interval bootstrap or ask your own question.

59
Is it true that the percentile bootstrap should never be used?
27
Mean of the bootstrap sample vs statistic of the sample
4
Calculate accelerated bootstrap interval in R