In hypothesis testing, the definition of p value is the probability of obtaining test results at least as extreme as the results actually observed, under the assumption that the null hypothesis is correct.

For one sided hypothesis tests, this definition of "extreme" makes sense to me. However, I am still unsure how to find "more extreme" values when considering two sided tests. Let me use an example to illustrate.

Suppose we are tossing a coin 10 times, and suppose the probability of getting a heads on any toss is p. Let $H_0: p=0.3$ and $H_1: p\ne 0.3$. Suppose that our test statistic is the total number of heads, which should follow a Binomial (10,0.3) distribution under the null hypothesis. Suppose that we observe 5 heads. I can see why when calculating the p value, we would need to include the probabilities of obtaining at least 5 heads, since the likelihood ratio at x=5,6,7,...,10 are all greater than or equal to the likelihood ratio at 5. 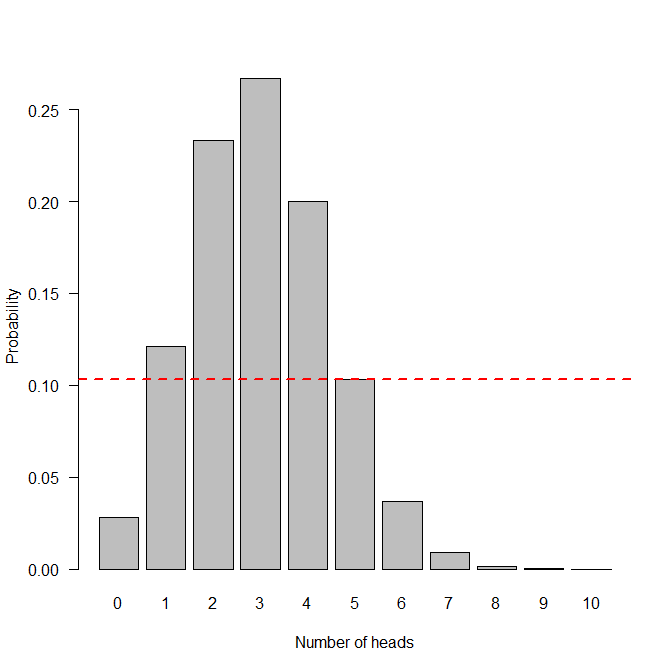 So let us assume that we have observed $n=5$ heads and wish to run a two-sided test. I have indicated the probability for observing $k=5$ under the null hypothesis of $p=0.3$ with the horizontal red dashed line. Take a look at the bars below that line.

What is an extreme outcome? It's an improbable one. Look at the probabilities. An outcome of $k=6$ is even more improbable than one of $k=5$, so it provides even more evidence against the null hypothesis. As do outcomes of $k=7, \dots, 10$. So these are all at least as improbable as the observed $k=5$, i.e., at least as extreme.

However, an outcome of $k=0$ would also be at least as improbable as $k=5$. If we had run the experiment twice with two different coins, and observed $k=5$ in one experiment and $k=0$ in the other, we would be more confident in rejecting the null hypothesis in the second than in the first.

In particular, when running the experiment only once (and testing two-sidedly), we need to include all events that are at least as improbable as the one we actually observed in calculating the $p$ value.

Note that this does not argue for including $k=1$ in our calculation, because it is (slightly) less improbable than the observed $k=5$. However, the difference in the probabilities under the null hypothesis is quite small, so one could reasonably argue that observing $k=1$ provides almost as much evidence against the null hypothesis as $k=5$, and so we should include it in calculating the $p$ value.

283
What is the meaning of p values and t values in statistical tests?