What happens to the shared explained variation in a regression? (Shown with Balentine graph)

So I asked this question and didn't get a response that cleared up my understanding. I came across some material today that provokes my question again in a different context.

In some slides I'm going through, the creator included this diagram: 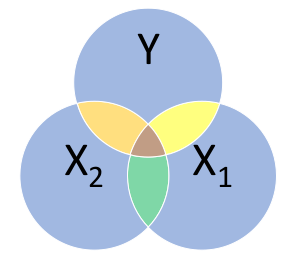 Which was referred to as "Ballentine Graph".

Why does brown disappear from both regressors. Where in mathematical space did it go? To me, it seems like $X_1$ and $X_2$ would have to share it but since this isn't the case, did it go into $\hat \beta_0$? Why?

The Ballantine diagram is correct. The brown part is lost when regressed on both variables. Just refer to the estimator equations for the coefficients in the two regressor case. There is a minus covariance(X1, X2) term.