Regression models' results: reporting them as means or medians?

I have a zero-inflated and extremely positively-skewed outcome variable - lottery wins in dollars. Thus, I use two-part analysis, since adjusting is also needed: one for positive values (lognormal regression) and the second for non-zero probability (logistic regression/bernoulli).

I have found that presenting the results of these two regressions in one plot makes the interpretation really simple: you can see the probability of winning (x-axis) together with the received amount of money (in case you won). 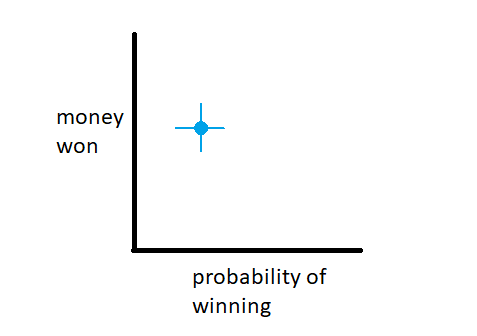 It's well known practice that crude non-normal data should be reported as median (IQR/min-max/quantiles/percentiles). However, if these values come from regression analysis, should I report them as means or medians in this graph? Does regression "convert" these variables to "normally distributed" variables?

Coefficients from logit models are usually interpreted as changes in odd ratios. That is, the coefficient is not directly interpreted in changes of the median or mean. You can estimate marginal effects on the mean if you specify the positon, where you want to take the derivative.

In order to interpret an estimates as changes in medians one needs additional assumptions.

For example, if the underlying latent distribution of SWB across groups in an ordered >probit or logit model is symmetric, the median and therefore the mean of SWB scores >are the same. So we can reinterpret the usual ordinal model’s estimates as the >effects of the explanatory variables on the median rather than the mean. We emphasise >here that heteroscedasticity should be explicitly accommodated to avoid assuming FOSD >a priori. (https://voxeu.org/article/subjective-wellbeing-focus-median-not-mean)

Not the answer you're looking for? Browse other questions tagged regression reporting or ask your own question.