Central limit theorem and the law of large numbers

I have a very beginner's question regarding the Central Limit Theorem (CLT):

Now the Law of Large Number states roughly speaking that the mean of i.i.d random variables converges (in probability or almost surely) to their expected value.

What I don't understand is: If, as the CLT states, the mean is approximately normally distributed, how then can it also converge to the expected value at the same time?

Any explanation is welcome.

This figure shows the distributions of the means of $n=1$ (blue), $10$ (red), and $100$ (gold) independent and identically distributed (iid) normal distributions (of unit variance and mean $\mu$): 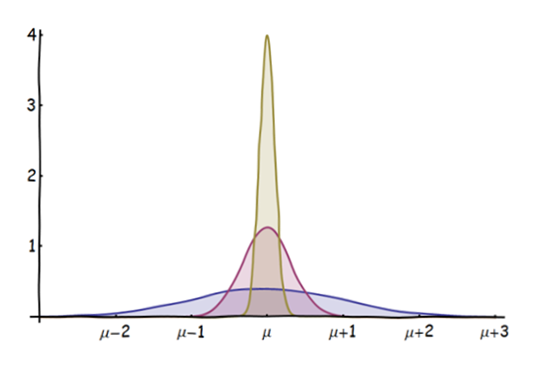 As $n$ increases, the distribution of the mean becomes more "focused" on $\mu$. (The sense of "focusing" is easily quantified: given any fixed open interval $(a,b)$ surrounding $\mu$, the amount of the distribution within $[a,b]$ increases with $n$ and has a limiting value of $1$.)

However, when we standardize these distributions, we rescale each of them to have a mean of $0$ and a unit variance: they are all the same then. This is how we see that although the PDFs of the means themselves are spiking upwards and focusing around $\mu$, nevertheless every one of these distributions is still has a Normal shape, even though they differ individually.

Not the answer you're looking for? Browse other questions tagged probability normal-distribution convergence central-limit-theorem law-of-large-numbers or ask your own question.

11
Difference between the Law of Large Numbers and the Central Limit Theorem in layman's term?
1
normalization coefficient in the central limit theorem
277
Famous statistical quotations
2
Is Wikipedia wrong about the null distribution of the signed rank statistic?
1
6-sided die roll average value