I am curious as to what describes the following distribution. If we were to record some data which are all from a normal distribution, but the standard-deviation changes for blocks of points recorded. For example, in the following plots we can see normally distributed data where each colour represents a different values of $\sigma$.

In the histogram all of the data have been plotted, which forms something that vaguely resembles a Student-T distribution -- although I don't think this is representative. I have also plotted the PDF's of each parent distribution on top of the histogram.

If I however sum the four normal distributions, the result perfectly envelopes the entire histogram: 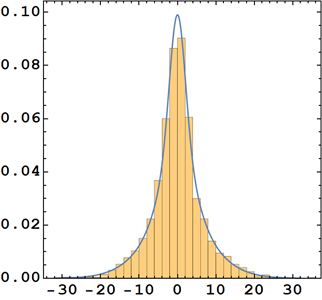 Is there a name for this distribution?

26
Student t as mixture of gaussian
6
Suppose $X$ follows a normal mixture. In which cases is $X$ itself normally distributed?
3
Can Gaussian mixture models with different amount of populations have the same pdf