I learning data science using Dataquest. In one of the missions, I encountered a nullity correlation plot like this: 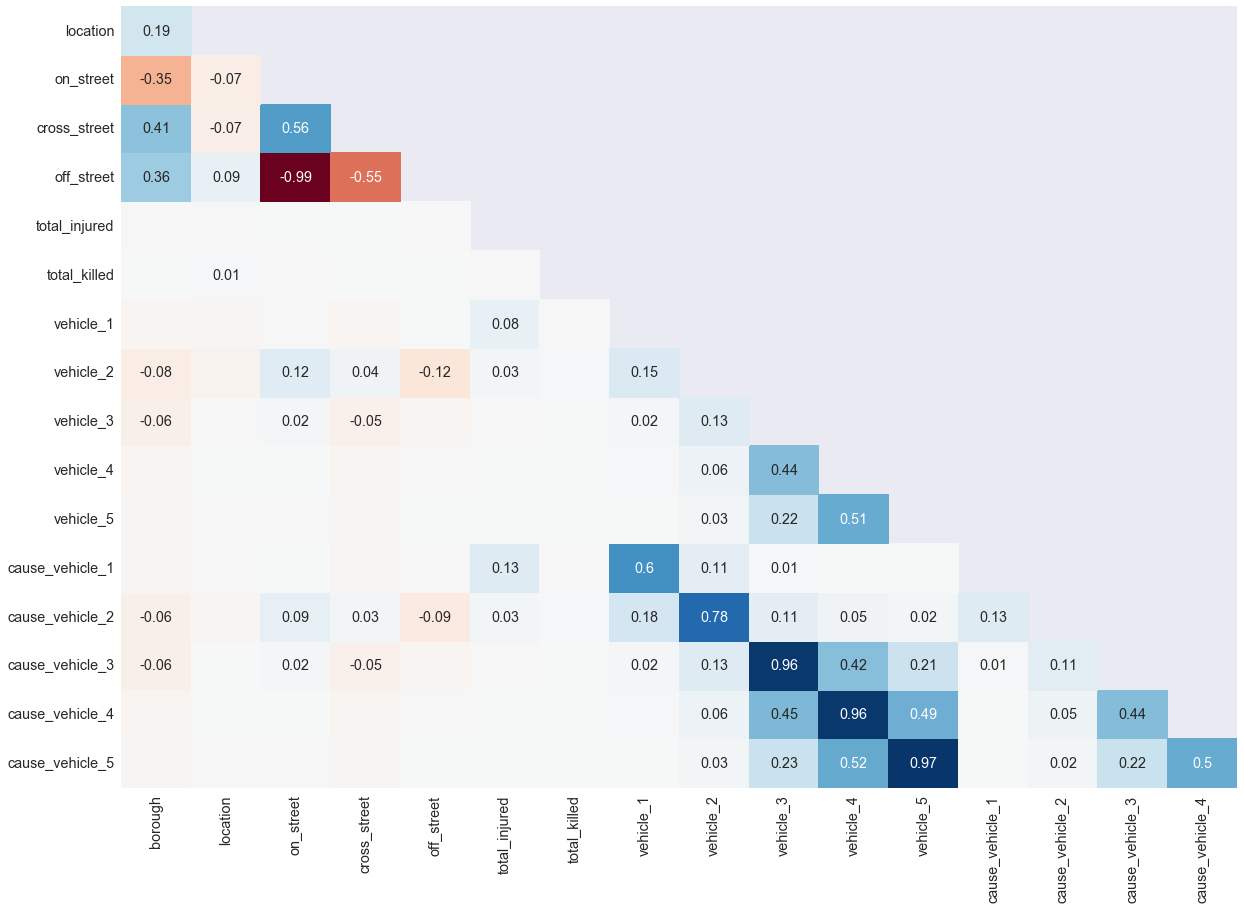 I am already familiar with the concept of correlation. But I have never heard of "nullity correlation".

My question is what is nullity correlation and how can I interpret this plot?

This is a technique used to understand patterns of missing values in a dataset.

Given two variables $X$ and $Y$ (which are in effect equal-length arrays of values, which are either references to computer objects -- of any type -- or a special code to representing a missing value), we can quantify their patterns of missing values using some kind of "correlation coefficient."

The most suitable correlation coefficients to use would be those developed for binary data, because we are really just thinking of the data as being "non-missing" or "missing," without regard to the actual values of the non-missing entries. Examples include Pearson's $\phi$, Matthews' MCC, Cramér's $\phi_C$, and Tetrachoric correlation.

However, a little Web searching suggests instead that people disregard any such subtleties and are just using the Pearson correlation coefficient. See, for instance, the answer at https://datascience.stackexchange.com/questions/61944/how-to-print-nullity-correlation-matrix, which correctly relates what's in the source code on GitHub. This suggests the technique is intended for use on medium to large datasets, where the distinctions among the different types of correlation are relatively unimportant.

Pearson's $\rho$ is defined in terms of covariances. One formula for the covariance of two arrays of numbers $a$ and $b$ (necessarily of the same length $n,$ which I will index from $1$ through $n$) is

(There are other formulas that differ from this one by a constant positive multiple $C(n).$ As we will see, these all give the same value of $\rho.$)

The definition of Pearsons' coefficient is

provided the denominator is nonzero. (This formula makes it evident that multiplying all covariances by $C(n)$ multiplies $\rho$ by $C(n)/\sqrt{C(n)^2} = 1,$ demonstrating the value of $C(n)$ doesn't matter.)

To apply this to patterns of missingness in $X$ and $Y$, notice that the calculations in $(*)$ come down to counting four things:

This formula is useful in revealing that

This alerts us to a subtlety in interpreting $\rho:$ we eventually will want to pay attention to the proportions of missing values in the variables. (It is unfortunate that the heat map in the question does not indicate these proportions -- there is room for improvement in this regard.)

The usual properties of Pearson's coefficient apply: in particular, the values of $\rho$ lie between $-1$ and $1.$

A glance at this matrix, then, is helpful in assessing hypotheses about whether pairs of variables might be lacking data for similar, opposite, or unrelated reasons.

Ex: In house price calculation, we will gather swimming pool and gardening data only if it is individual home. If it is appartment, we will gather the data. In this case it is filled as nan instead of zero in data collection process.

So if we have nan in swimming pool if it is appartment type. It is a missing value intentionally. i.e., known missing value with purpose.

Not the answer you're looking for? Browse other questions tagged correlation interpretation or ask your own question.

1
How to calculate nullity correlation matrix?