This website explains ANOVA and F ratio as follows:

"ANOVA partitions the variability among all the values into one component that is due to variability among group means (due to the treatment) and another component that is due to variability within the groups (also called residual variation)... Each sum-of-squares is associated with a certain number of degrees of freedom... and the mean square (MS) is computed by dividing the sum-of-squares by the appropriate number of degrees of freedom... The F ratio is the ratio of two mean square values..."

How can ANOVA know to partition the variability into 2 distinct components (due to the treatment and due to inherent variation)?

Consider the following data simulated in R according to the model for a one-factor ANOVA with three levels of the factor and ten replications at each level. Each level has variance $\sigma^2 = 3^2 = 9.$

Here is a stripchart in R showing the ten observations in each group.

The ANOVA table is given below:

MSA = $15.7382$ is the average of the variances within each of the three groups. This is one way to estimate $\sigma^2.$ [Never mind that it is not a very good estimate; with only 30 observations altogether, we can't expect a really close estimate.]

So the way ANOVA "knows" how to get the two variances is because of the two procedures we have just seen. 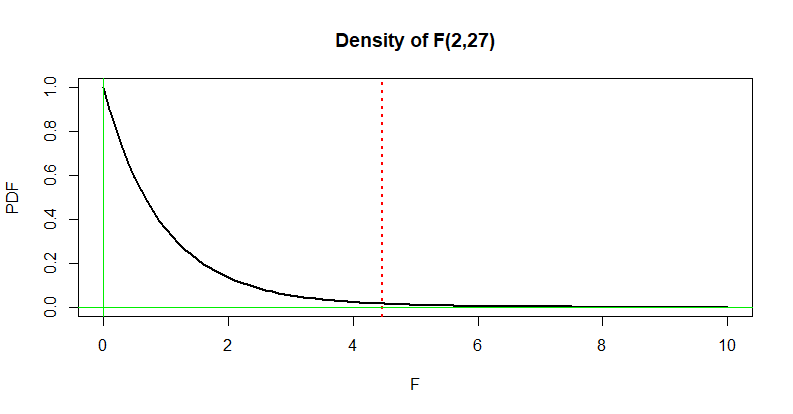 Not the answer you're looking for? Browse other questions tagged anova inference or ask your own question.

66
How to visualize what ANOVA does?
4
Partitioning sum of squares