Is it still of utility to run a full-blown LME modelling procedure when the visual inspections between the predictors and outcome variable are characterless?

I have been arguing that it makes little sense to invest more time and effort in using LME in such a case, since the goal is to discover which predictors have significant effects on the outcome but visually eyeballing the pairwise scatter plots indicates otherwise.

In greater detail, I have two predictors W and G and an outcome S2 in a longitudinal dataset; the time variable is called ACAGE, which is the individuals' ages. I am interested to see whether any of the two predictors influence S2 significantly.

I produced the scatter plots of mean S2 over ACAGE against W of individuals. In addition, instead of averaging S2 over ACAGE, I faceted by ACAGE in a second group of plots. I did the same also for G. Here is an example where S2 values constitute the y-axis and W the x-axis (I cannot show too much due to data privacy): 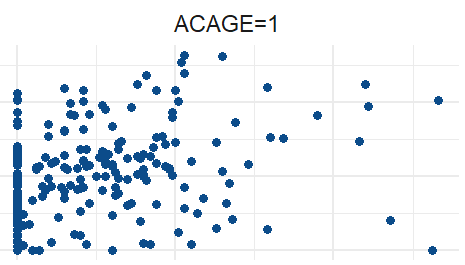 None of the plots showed patterns/candidate relationships between the independent and dependent variables. I am wondering whether it is wise to proceed to LME in this case, and I think it is not.

After some discussion in the comments, I don't think you can discard the idea of fitting a mixed model based on the plots that you have described.

The study design is reasonably complex and the proposed model:

...is likewise quite complex. In order to discard the idea of fitting a mixed model you would need to establish that there is very little variation of the outcome within subjects and items. To destermine this from plots alone would mean plotting the outcome against covariates for every subject. Since you have 484 subjects, this is not really feasible. With 9 items it is feasible, but still, it is hard to see how you would determine that there is no variation, simply from inspecting such plots.

The best way forward in this situation is to fit the proposed model and if any of the variance components are close to zero, then consider removing them. The random structure of the proposed model is quite complex so it would not be surprising if it led to a singular fit. If so then you can follow the procedure in this answer:
How to simplify a singular random structure when reported correlations are not near +1/-1

Not the answer you're looking for? Browse other questions tagged regression mixed-model repeated-measures multilevel-analysis random-effects-model or ask your own question.

10
How to simplify a singular random structure when reported correlations are not near +1/-1
6
Justifying the Need for Mixed Effects Models (aka. LME, MLM, etc.)