Currently I am re-reading some chapters of: An Introduction to Statistical Learning with Applications in R by Gareth James, Daniela Witten, Trevor Hastie and Robert Tibshirani (Springer, 2015). Now, I have some doubts about what is said there.

Above all it seems to me relevant to note that in chapter 2 two concepts are introduced : prediction accuracy-model interpretability tradeoff and bias-variance tradeoff. I mentioned the latter in an earlier question.

In this book, it is suggested that focusing on expected prediction error (test MSE) yields the following assertions:

It follows that linear regression implies more bias but less variance. The optimum in the tradeoff between bias and variance, the minimum in test MSE, depends on the true form of $f()$ [in $Y = f(X) + \epsilon$]. Sometimes linear regression works better than more flexible alternatives and sometimes not. This graph tells this story: 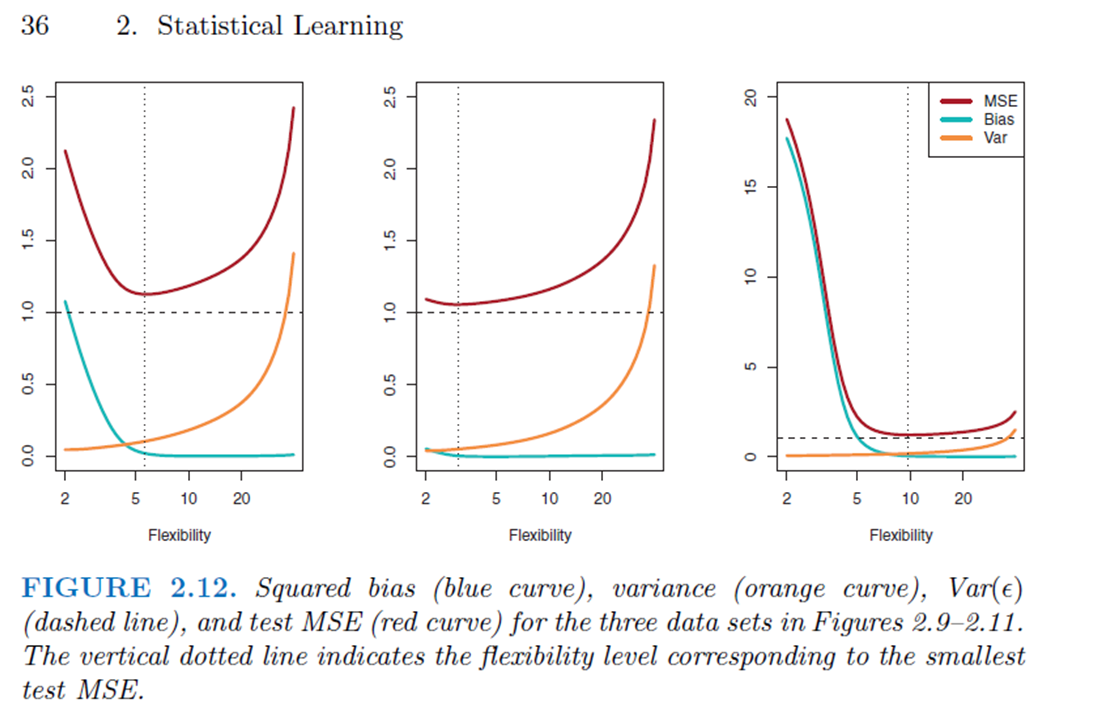 In the second case linear regression works quite well, in the others two not so much. All is ok in this perspective.

In my opinion the problem appears under the perspective of inference and interpretability used in this book. In fact this book also suggests that:

As a result we have that linear regressions, OLS and even more LASSO, are the most interpretable and more powerful for inference. This graph tell this story: 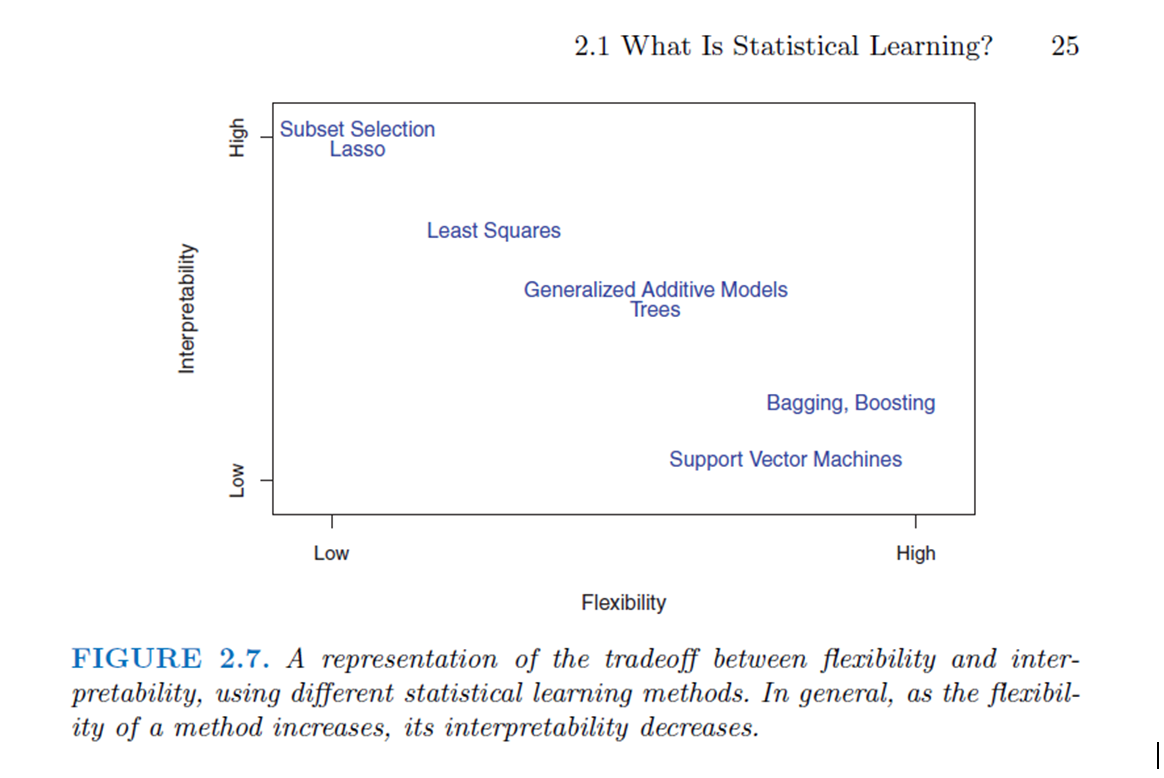 EDIT: My question can summarized as:

I read carefully the answer and comments of Tim. However it seems to me that some problems remain. So, actually it looks like in some sense the first condition can hold, i.e. in a sense where “interpretability” is a property of the estimated model itself (its relation with something "outside" are not considered).

About inference "outside" is the core, but the problem can move around its precise meaning. Then, I checked the definition that Tim suggested (What is the definition of Inference?), also here (https://en.wikipedia.org/wiki/Statistical_inference), and elsewhere. Some definition are quite general but in most material that I have inference is intended as something like: from sample say something about the "true model", regardless of his deep meaning. So, the Authors of the book under consideration used something like the “true model”, implying we cannot skip it. Now, any biased estimator cannot say something right about the true model and/or its parameters, even asymptotically. Unbiasedness/consistency (difference irrelevant here) is the main requirements for any model written for pure inference goal. Therefore the second condition cannot hold, and the contradiction remains.

There’s no contradiction. The fact that something is easy to interpret has nothing to do with how accurate is it. The most interpretable model you could imagine is to predict constant, independently of the data. In such case, you would always be able to explain why your model made the prediction it made, but the predictions would be horrible.

That said, it’s not the case that you need complicated, black-box models if you want accurate results and poorly performing models for interpretability. Here you can find nice, popular article by Cynthia Rudin and Joanna Radin, where they give example of interpretable models giving very good results and use it to discuss how performance vs interpretability is a false dichotomy. There’s also very interesting episode of Data Skeptic podcast on this subject hosting Cynthia Rudin.

You may be interested also in the When is a biased estimator preferable to unbiased one? thread.

Not the answer you're looking for? Browse other questions tagged machine-learning inference prediction bias-variance-tradeoff or ask your own question.

54
When is a biased estimator preferable to unbiased one?
20
Minimizing bias in explanatory modeling, why? (Galit Shmueli's "To Explain or to Predict")
7
When will $\text{Variance}=\text{Bias}^2$ hold for the optimal model?
4
What is the definition of Inference?
4
Is the idea of a bias-variance "tradeoff" a false construct?

1
Bias-variance decomposition of squared error
13
Different usage of the term "Bias" in stats/machine learning
1
What effect does unobserved error and residuals have on the "bias" of a model?
1
Reasons to prefer low bias with higher variance over the alternative (and vice versa)