In the usual t-test, the null hypothesis is that "the difference between the means of the two groups is zero".

Is there a test that uses "the difference between the means of the two groups is less than a certain value" as the null hypothesis?

The population and sample population can be assumed to meet the same requirements as the t-test. If necessary, you can use following settings;

But with this method you will reject the null hypothesis less often than the aimed significance level. This difference arrises because confidence intervals relate to point hypotheses, which is not your case.

In the image below the boundaries for the t-value of a 95% significance test are drawn. These boundaries are compared with sample distributions of the standard deviation and difference of means for samples of size 5. The $X$ and $Y$ are normal distributed with equal variance and equal means, except in the lower image where the means differ by $\mu_y-\mu_X = 0.5$. 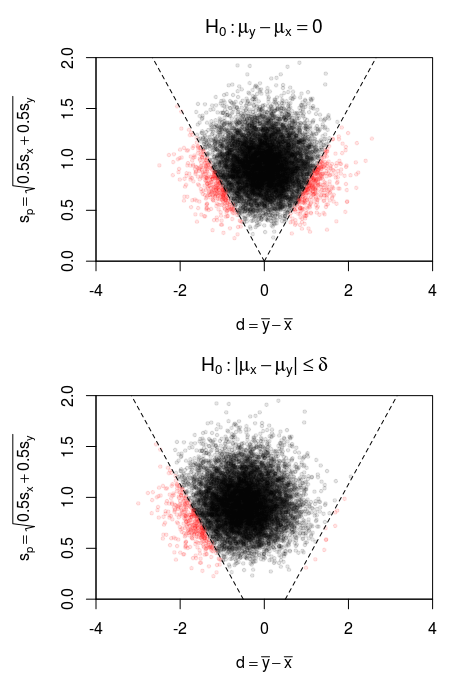 In the first image, you see that 5% of the samples lead to a rejection of the hypothesis (as designed by setting the level at 95%). However, in the lower image, the rejection rate is lower and not equal to 5% (Because the boundaries are wider due to the shift $\delta$).

So possibly one can choose to draw the boundaries more narrow. But for large $s_p$ you get closer to the current boundaries (Intuitively you can say that $\delta$ becomes less important, relatively smaller, when the variance of the variables is large).

So we can make sharper boundaries than the likelihood ratio test. However, there is no unique way to do this.

R-code for the images:

In the image below we draw the situation like above, but now we change the standard deviation $\sigma$ of the population from which we draw the sample. Now the image contains two seperate clouds. In the one case $\sigma = 1$ like before. In the other case $\sigma = 0.2$, and this creates the additional smaller little cloud of points.

The diagonal lines are the borders for some critical level of the likelihood ratio. The first case (upper image) is for a point null hypothesis $H_0 : \mu = 0$, the second case is for a composite hypothesis $H_0: \sigma \leq \mu \leq \sigma$ (where in this particular image $\sigma = 0.15$). 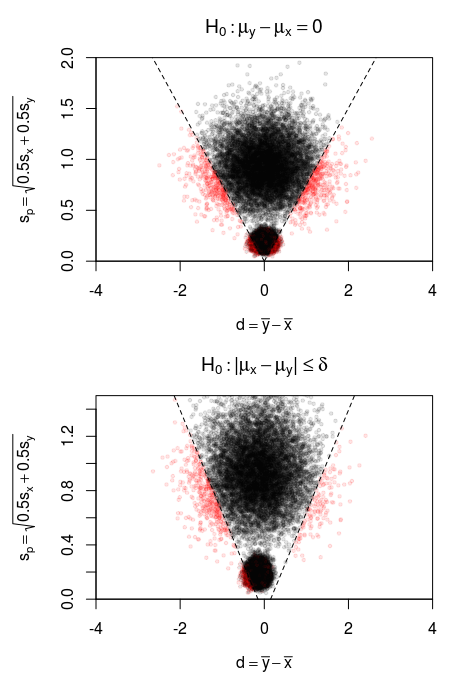 I think one possible solution for this test is to

Once this is done, you have two choices.

You can look at the one-sided CI for $|\Delta|$ to see if it excludes your superiority threshold. You can get that easily from step (2), since the overlap between two one-sided 95% CIs makes a two-sided 90% CI, so you can work backwards from the usual 90% CI for $|\Delta|$.

Alternatively, you can perform a two-sided hypothesis test on $|\Delta|$, and then calculate the one-sided p-value from that. This is a bit more work, but is just a matter of getting the sign of the inequality, a $\chi^2$ statistic from the two-sided test, and evaluating cumulative standard normal distribution. If your test returns an F-statistic, you will have to use that instead, along with the t distribution in place of the normal. If you don't want to go this route, when $|\Delta| - \delta$ is positive, you can simply divide the two-sided p-value by 2. In the other case, you need to calculate $1-\frac{p}{2}$ since you are in the other tail. This simpler division approach works for symmetric distributions only.

Here is an example in Stata, where we will conduct two such hypotheses comparing the average price of foreign (foreign = 1) and domestic cars (foreign = 0):

Here the null is $H_0=|\Delta|\le \delta$ (practical equivalence) versus $H_a=|\Delta| > \delta$ (non-equivalence). We focus on testing $|\Delta| = \delta$, so we calculate the probability at the most extreme point of the null hypothesis, closest to alternative parameter space. This means that the p-value is exact only for $|\Delta| = \delta$. If $|\Delta| < \delta$, then our p-value is just a conservative bound on the type I error rate (the error being finding a negative effect when there is none).

You can perform a t-test and just look at confidence intervals. In some circumstances (e.g. clinical trials) you are not interested in statistical significance, but whether the difference is significant from a practical point of view by adding a margin $\delta$ (in a clinical trials setting it’s called clinical significance). Have a look at the picture. We assess mean response difference in experimental and control group. 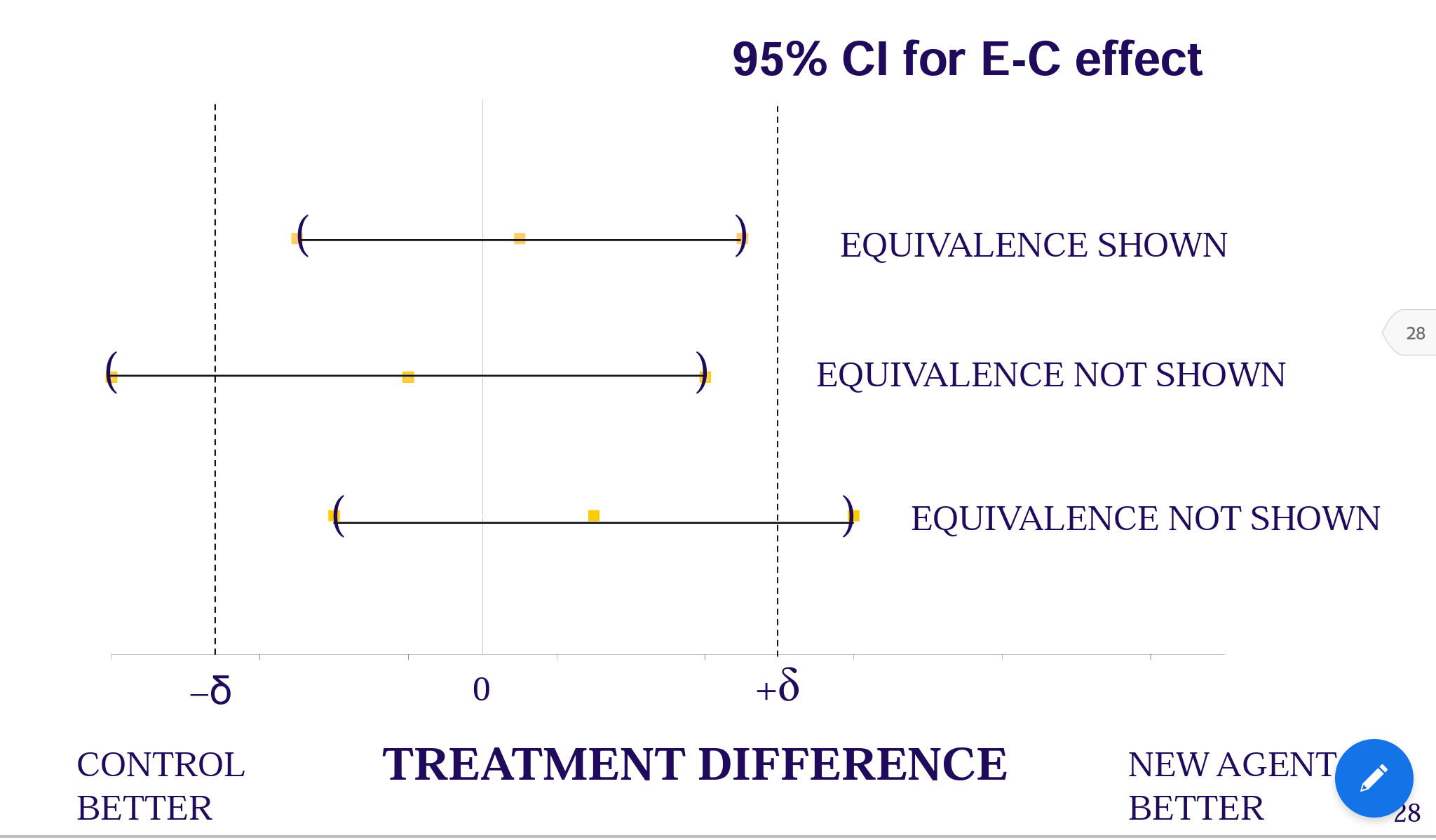 one of ideas is to add $\delta$ to one population (raising mean) and in second test substracting $\delta$ and then computing statistic and figure out in two "one-sided tests" p-values, after adding these you will have one p-value for two sided test stated in your question

ask questions if needed, I am not entirely sure of this approach, and would welcome any critique

And, let $t_{obs}$ be the t-value calculated from actual observations.

If the mean and standard deviation of the population are known, I think these distributions can be brought to a form similar to the simulation of user2974951 by using the regenerability of the normal distribution.

However, if both of the mean and standard deviation of the population are unknown, then I have no idea.

I'm waiting for your opinion.

1
How to quantify whether the difference between two groups is relevant?
2
Is my interpretation of the p-value and confidence interval correct?
4
How to test the null hypothesis that the difference between groups is entirely due to binomial variance?
1
What are the problems if in a AB test the control group is not big enough?
0
How does the t-distribution arise from a sample that is not normally distributed and allows me to A/B test with the t-test?
0
a method to perform statistical test to test the diff of mean is larger than a threshold