To visualize, I have a dataframe that looks something like this:

When I split into groups by the ID column and find the Pearson correlation between Val1 and Val2 within each group, I get

But when I calculate the Pearson correlation between the same features on the whole/original dataframe, I get .03.

Can someone help me understand why this happens? Does this mean one method is valid while the other isn't?

The way to understand what is happening is to look at your data example and consider what correlation is measuring. Here is a plot: 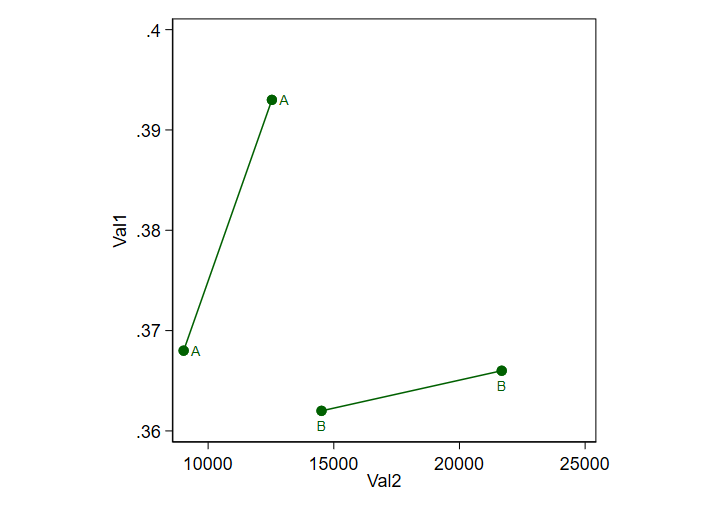 The explanation doesn't depend on which variable goes on which axis.

For this example, I get a correlation for all data points of $-$0.278, but it seems clear that you have many more identifiers than 2. However, the explanation for correlations of magnitude 1 remains that they describe any configuration exactly matched by straight lines, as any introduction to correlation should explain. Otherwise what you mean by "pretty high" is not explained: $\pm$1 is as high as you can get.

More generally, the fact that groupwise results may contradict the total pattern of results is an amalgamation paradox often named for Edward H. Simpson, although it was known much earlier than when he wrote about it. Whether that is substantively or scientifically surprising or expected is something for the researcher to think about. Your problem description contains no detail that allows any suggestion there. The first step is almost always to look more carefully at the data: groupwise correlations being stronger or weaker than all-data correlations are both possible. Groups making no difference would imply that the grouping is irrelevant and uninformative.

Your correlations happen to be well-defined but they don't tell you very much.