I struggle writing hypothesis because I get very much confused by reference groups in the context of regression models.

For my example I'm using the mtcars dataset. The predictors are wt(weight), cyl(number of cylinders), and gear(number of gears), and the outcome variable is mpg (miles per gallon).

Say all your friends think you should buy a 6 cylinder car, but before you make up your mind you want to know how 6 cylinder cars perform miles-per-gallon-wise compared to 4 cylinder cars because you think there might be a difference.

Would this be a fair model interpretation?: 6 cylinder vehicles travel fewer miles per gallon (p=0.010, β -4.00, CI -6.95 - -1.04) as compared to 4 cylinder vehicles when adjusting for all other predictors, thus rejecting the null hypothesis.

Sorry for troubling, and thanks in advance for any feedback! 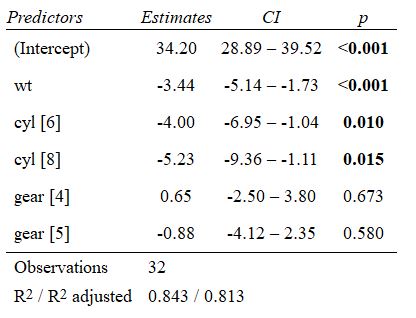 Yes, you already got the right answer to both of your questions.

If you would like to compare 6-cylinder cars with 8-cylinder car, then you would have to change the reference category. In your hypothesis you just could had added at the end (or as a footnote): "when adjusting for weight and gear", but it is fine the way you did it.

Let's assume that your hypothesis was related to gears, and you were comparing 4-gear vehicles with 3-gear vehicles. Then your result would be β: 0.65; p-value: 0.67; CI: -2.5, 3.8. You would say that: "There is no statistically significant difference between three and four gear cars in fuel consumption, when adjusting for weight and engine power, thus failing to reject the null hypothesis".

Not the answer you're looking for? Browse other questions tagged r regression multiple-regression linear-model interpretation or ask your own question.