People arrive at a store as a non-homogeneous Poisson process with rate t, where t is the time measured in hours between noon and 6pm.

I am given from Campbell's Theorem that:

I'm fairly certain that for 1. and 2. they are both uniform on $(0,1)$, since for 2. we know that the $U_1$ and $U_2$ are independent from each other and that height and arrival time are uncorrelated, and 1. should follow quite simply from the theorem.

For 5. since we have that the mean is $2$, then the number of items people by is $Geom(1/2)$. So I can quite simply work out the expected number of people arriving before 2pm and the mean will be $1/2$ multiplied by that expected value. However I have no clue how to calculate the variance.

Question 5 is similarly based on different reason

It may often help to play a bit with some simple computations to get an idea how these arrivals look like.

Below I am using the method from the question What distribution to use to model time before a train arrives? to model the waiting time of arrivals as:

This gives the probability that the time will be $t$ or less, given the condition that we are starting to wait from $t_b$.

In the following code, we model these waiting times repeatedly and see how the distribution is:

It is no surprise that the distribution of times is equal to a linear function of time since we considered "a non-homogeneous Poisson process with rate t".

But in the histogram on the right, we see that the same is true for the distribution of arrival times when we look at the time of the first arrival time, conditional on only one arrival in the first hour. 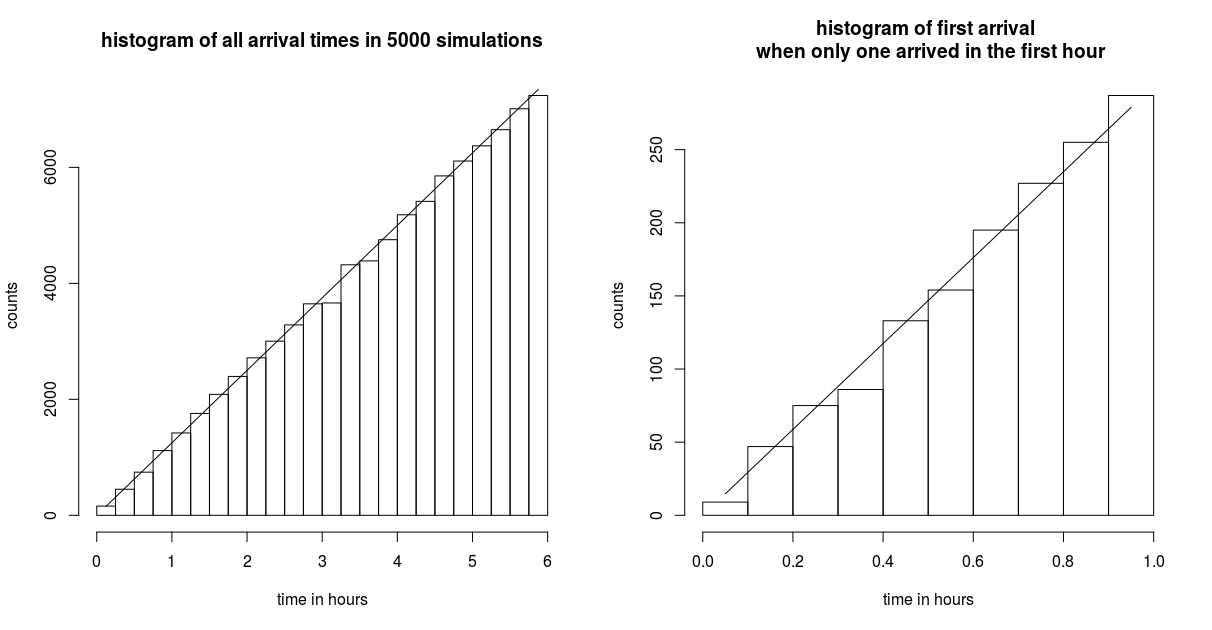 The example image below shows a simulation in which case there is only one arrival within the first hour.

We could express the number of arrivals:

In relation to the question

We can look at the question

This relates to the function of the order statistic, and also has a similar description/derivation here.

If we know that precisely two people arrived in the first hour, what is the density function of the arrival time of the person who arrived first?

So the for the 1-st order statistic for a sample of size 2 the quantile will be distributed as $Beta(1,2)$:

This solution does match the simulations 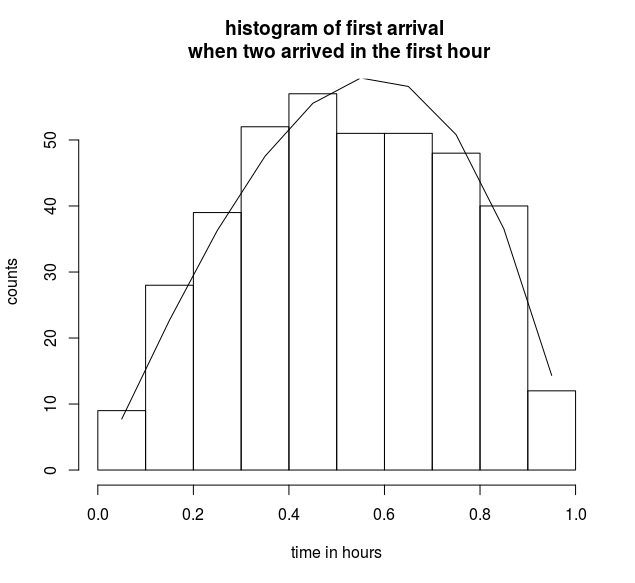 Your computation is very similar but has a factor $8$ in place of $4$.

I guess that you will get the same when you use

For question 1 you can use Campbell's theorem but it is not really necessary.

For question 2, 4 and 5 you need to use different reasoning. These questions are not about the order.

Not the answer you're looking for? Browse other questions tagged probability poisson-distribution density-function stochastic-processes poisson-process or ask your own question.

41
Relationship between Binomial and Beta distributions
16
What distribution to use to model time before a train arrives?