Question: Does the distribution of $Y$ have any name? Does it have a well defined PDF and CDF?

Distributions such as $Y$ arise often in finance, because interest rates might be modelled as exponential martingales (i.e. their distribution at a specific point in time would correspond to the variable $X$ defined above). Then, Bond prices would actually have a distribution corresponding to the variable $Y$ (that is a zero-coupon bond maturing in one year. If the bond matures in "$n$" years, then the denominator is of power $n$: $(1+X)^n$) 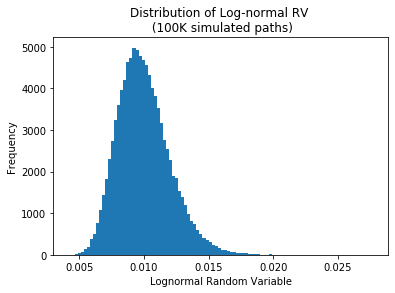 For $Y$, the shape of the graph resembles a log-normal random variable, but rotated around its mean axis (i.e. longer left-tail instead of longer right-tail): just by eyeballing the graph, I would think that perhaps the PDF and CDF are well defined, but before diving into attempting the algebra, I wanted to check here whether this problem has a standard solution? 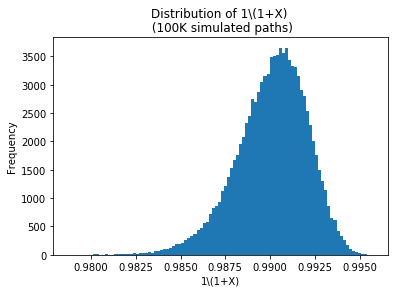 I will answer a simplified version, so leave the generalization as an exercise. Let $Z$ be a standard normal random variable so $X=e^Z$ is standard lognormal. Since $X>0 $ we have $Y=\frac1{1+X}$ is in the unit interval. Let $\phi, \Phi$ be the density and cdf (cumulative distribution ) functions of the standard normal, then we find $$ \DeclareMathOperator{\P}{\mathbb{P}} F_Y(y)=\P(Y \le y)= 1-\Phi\left( \ln(\frac{1-y}{y})\right) $$ and by differentiation the density is $$f_Y(y)=\frac{\phi\left( \ln(\frac{1-y}{y}) \right)}{y(1-y)} $$ The factor in the denominator leads the thoughts to something logistic, and,in fact, this is a Logit-normal distribution.

That relationship seems important and need a simpler derivation, just from the definitions. Since $Z$ is standard normal, so symmetric about zero, $-Z$ have the same distribution, so to represent (the distribution of ) $X$ we can as well use $X=e^{-Z}$. Then $$ Y=\frac1{1+X}=\frac1{1+e^{-Z}}=\frac{e^Z}{1+e^Z} $$ and it follows directly that $\operatorname{logit}(Y)$ is a standard normal distribution, without any need of deriving the density function.