Which statistical model is being used in the Pfizer study design for vaccine efficacy?

but it doesn't have an answer, at the moment. Also, my question is different: the other question asks how to compute VE, using functions from a R package. I want to know why vaccine efficacy is defined as illustrated at the bottom of this page:

and which is the statistical model behind it.

My attempts: I thought the researches would fit a logistic regression model a single binary predictor $X$, identifying subjects who got the vaccine ($X=1$) or not ($X=0$):

However, this is clearly not the case, because for the Moderna vaccine we know that there were 5 cases in the vaccine arm, and 90 in the placebo arm, which corresponds to a $\text{VE}$ of $94.\bar{4}\%$. These data alone are enough to determine $\text{VE}$, but surely they're not enough to fit a LR model, and thus to determine $\beta_1$.

The relation between efficiency and illness risk ratio

I want to know why vaccine efficacy is defined as illustrated at the bottom of this page:

This is just a definition. Possibly the following expression may help you to get a different intuition about it

Note the below code uses cbind in the glm function. For more about entering this see this answer here.

This gives the result:

From this, you can compute (estimate) the odds, the efficiency, and their confidence intervals. See also: How exactly is the "effectiveness" in the Moderna and Pfizer vaccine trials estimated?

These analyses are performed in an early stage to verify whether, given the outcomes, the vaccine is effective. The tables give hypothetical observations for which they would reach the tipping point to declare either failure (posterior probability of success <5%) or great success (the probability that VE>30% is larger than 0.995).

These percentages for the tipping points are actually based on controlling Type I error (more about that below). They control the overall type I error, but it is not clear how this is distributed among the multiple go/no-go points. 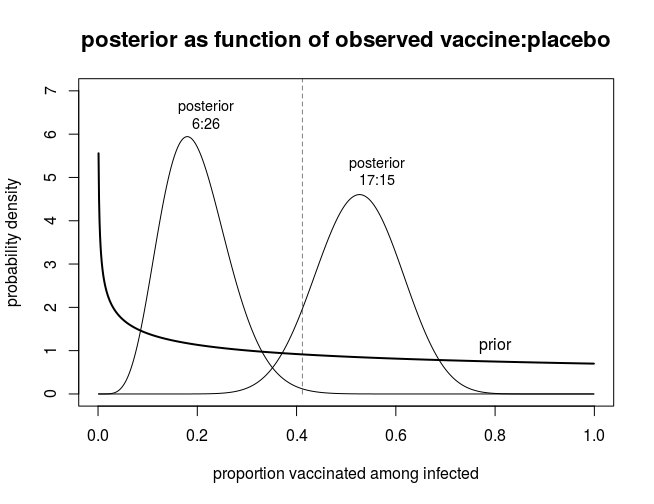 Controlling type I error (Table 7 and 8) 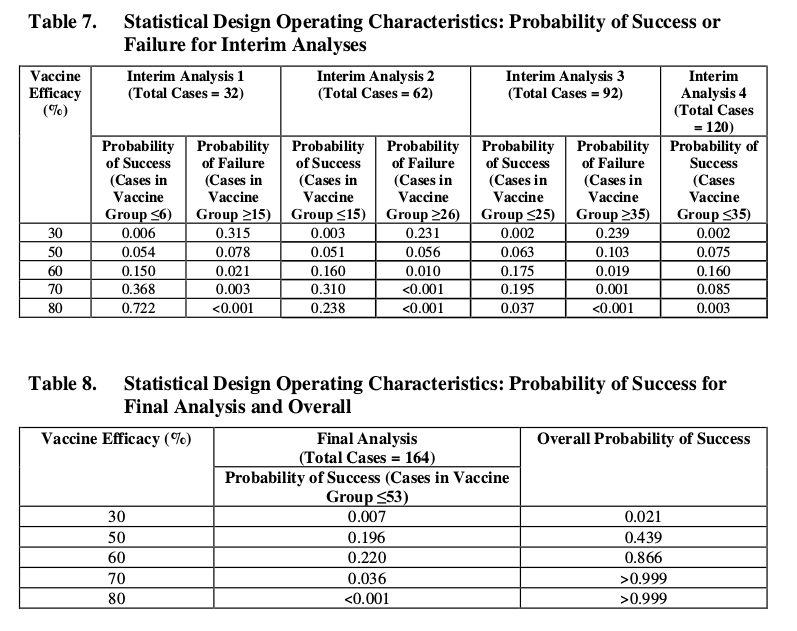 Table 7 and 8 give an analysis for the probability to succeed given a certain VE (they display for 30, 50, 60, 70, 80%). It gives the probability that the analysis passes the criterium for success during one of the interim analyses or with the final analysis.

The other columns are not similar binomial distributions. They represent the probability of reaching the success criterium if there wasn't success during the earlier analysis. I am not sure how they computed this (they refer to a statistical analysis plan, SAP, but it is unclear where this can be found and if it is open access). However, we can simulate it with some R-code

Although they use a Bayesian analysis to compute values in table 6. They have chosen the boundaries, based on which they performed the Bayesian analysis, according to controlling the type I error (I think that they use the probability to have success given VE = 0.3, p=0.021, as the basis for the type I error. This means that if the true VE = 0.3 then they might, erroneously, still declare success with probability 0.021, and if the true VE<0.3 this type I error will be even less)

All these results are consistent with using the conditional Maximum Likelihood Estimate as implemented in the base R implementation of the fisher's exact test:

Not the answer you're looking for? Browse other questions tagged bayesian statistical-power epidemiology clinical-trials relative-risk or ask your own question.

36
How exactly is the "effectiveness" in the Moderna and Pfizer vaccine trials estimated?
15
In using the cbind() function in R for a logistic regression on a $2 \times 2$ table, what is the explicit functional form of the regression equation?
19
Analysis of Danish mask study data by Nassim Nicholas Taleb (binomial GLM with complete separation)
10
How does the beta prior affect the posterior under a binomial likelihood
7
How to calculate 95% CI of vaccine with 90% efficacy?
6
Analyzing Pfizer Vaccine Efficacy: Testing a Claim about 2 Proportions

3
Mixed effects model for power analysis to aid study design
5
Study design question: What's the best design to assess harm of an exposure?
1
(Minimum) Sample size in a clinical study, rule-of-thumb
0
Power calculation & study design for study with rare safety outcome
36
How exactly is the "effectiveness" in the Moderna and Pfizer vaccine trials estimated?
2
How to estimate the effects of vaccines with Beta- Bernoulli inference
0
What's the posterior distribution for vaccine effectiveness, given Pfizer's 12-15yo study results?
0
Can I do Bayesian Logistic Regression of multiple categorical variables one by one?