how to select the best non-linear model that represents the data?

I have developed different non-linear models, all of them follow the following formula:

different values of b0, b1, b2, b3, and b4 have been estimated with different R-square and adjusted R-square.

These models exemplify an approach known as the "Box-Tidwell Transformation." Given explanatory variables $x_i$ and a response variable $y,$ the usual Ordinary Least Squares model can be written

In case $y$ does not appear to enjoy such a linear relationship with the $x_i,$ it often is possible to "linearize" it by transforming some of the $x_i.$ (See https://stats.stackexchange.com/a/4833/919 for a general discussion of this process.) When a variable is positive, the power transformations $x \to x^\gamma$ are among the simplest, best-understood, and flexible possibilities.

Let us, then, identify a subset of the explanatory variables that might be so transformed. Numbering them $1$ through $k,$ the model is

This is precisely your model with $k=p=2.$

The Box-Tidwell method is the least-squares solution. This means it seeks a set of parameter estimates $\hat\beta_0, \hat\beta_1, \ldots, \hat\beta_p;$ $\hat\gamma_1, \ldots, \hat\gamma_k$ to minimize the mean squared deviation between the observed values of $y$ and the values predicted by the model. (These deviations are the "residuals.") It finds these estimates in a two-stage process:

It equals $(x^\gamma - 1)/\gamma$ when $\gamma\ne 0$ and is the natural logarithm when $\gamma=0.$ One distinct advantage it has over a pure power is that (unlike a power transformation with a possibly negative power) it preserves order: whenever $x_1 \gt x_2,$ $\operatorname{BC}(x_1;\gamma) \gt \operatorname{BC}(x_2;\gamma).$ Since we pay attention to the signs of regression coefficients $\hat\beta_i,$ it is useful to preserve order because that will tend to preserve the sign.

Going further -- this is a bit of an innovation in that I haven't seen anyone use it -- I would suggest modifying the Box-Cox transformation in the following way. For any batch of positive values $(x_1,x_2,\ldots, x_n),$ let $m$ be their mean and for any positive number $x$ set

What are those estimates, by the way? Letting $m_i$ be the mean of variable $i$ (for $ 1\le i \le k$), simply rewrite the new model in terms of the original Box-Cox transformations (or power transformations) to discover the relationships:

This is the model of the question with

I will illustrate this with an example.

The car package installed with R includes a boxTidwell function (developed by John Fox of McMaster University) to estimate the $\gamma_i.$ Its documentation uses the Prestige dataset of 98 (non-missing) observations of occupation of Canadians in 1971. It proposes a model in which two variables, income ($x_1$) and education ($x_2$) may be transformed; and another four variables (a categorical variable type with three levels and a quadratic function of women) are not transformed. Thus, $k=2$ and $p=6$ in this example.

Here are the raw $(y,x_1,x_2)$ data (with point colors indicating the three possible values of type, which will be a covariate $x_3$ in the model 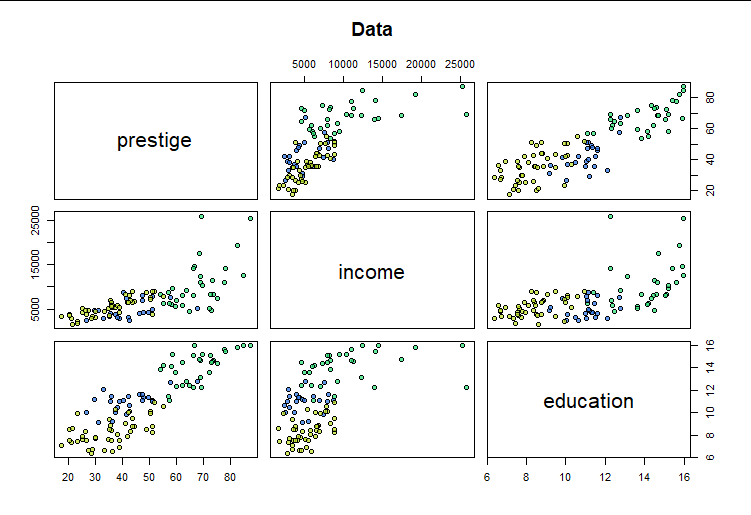 The relationship between income and prestige looks especially non-linear, suggesting the value of re-expressing income. 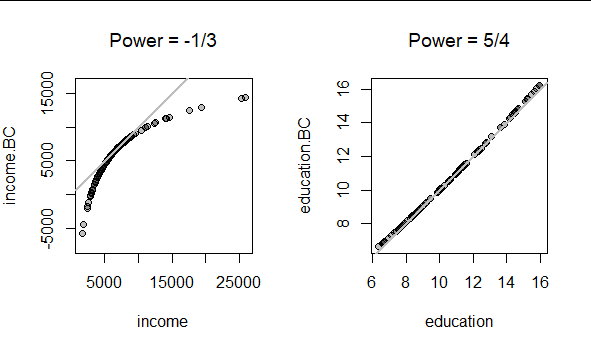 We obtain a new picture of the relationships with prestige using these re-expressed values: 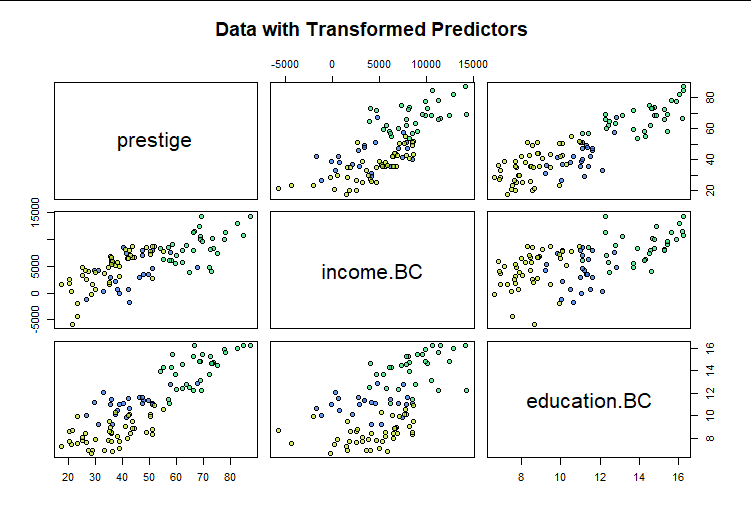 The relationships now appear linear (bearing in mind we have not accounted for the effects of type and women).

We proceed to find the best fit by applying Ordinary Least Squares regression. Here is a summary of its results:

It is usually of interest to know how much, if at all, this extra effort of estimating powers $\gamma_1$ and $\gamma_2$ has accomplished. Without them, the model results are these:

The improvement is subtle but real: a residual standard error (the root mean square) has decreased from $7.012$ to $6.243$ and the residuals are no longer as extreme as they were. (Some adjustment to the p-values and adjusted R-squared statistics should be made to account for the preliminary estimation of two powers, but that discussion would make this post too lengthy.) In the model with transformed variables, the quadratic term women looks significant, but it was not significant in the original least squares model. That may be of fundamental interest in sociological research.

Notice how little the parameter estimates changed between the models: that is what use of $\phi$ rather than the powers $x\to x^\gamma$ or the Box-Cox function $\operatorname{BC}$ has accomplished for us. To some extent we may still interpret the coefficients as we always would: namely, marginal rates of change. For instance, the original income estimate $\hat\beta_1 = 0.0009747$ might be interpreted as "increases of one unit of income are associated with changes of $+0.00097$ units of prestige." For the new estimate we might say "increases of one unit of income for people with average incomes are associated with changes of $+0.001938$ units of prestige." It would be fair to conclude that the model with the power transformations estimates the income coefficient is about $0.0019/0.0097 \approx 2$ times the model without the power transformations, at least for typical incomes. This simple interpretation is possible only when using $\phi$ for the transformations -- not with $\operatorname{BC}$ or pure powers of the variables.

The following R code produced the figures and shows how to use the boxTidwell function and lm function to fit the power model of the question.

Not the answer you're looking for? Browse other questions tagged regression nonlinear-regression or ask your own question.

2
How should I go about doing regression with a series of exponents involved?
48
Regression: Transforming Variables
17
Intuition behind Box-Cox transform
0
How do I take the derivative to $\gamma $ of $(y-x^{\gamma})^T(y-x^{\gamma})$?