I am reading the Probability Lifesaver and in the introduction to continuous variables it shows the contradiction when summing infinite number of zeros such as the union of signleton events as, 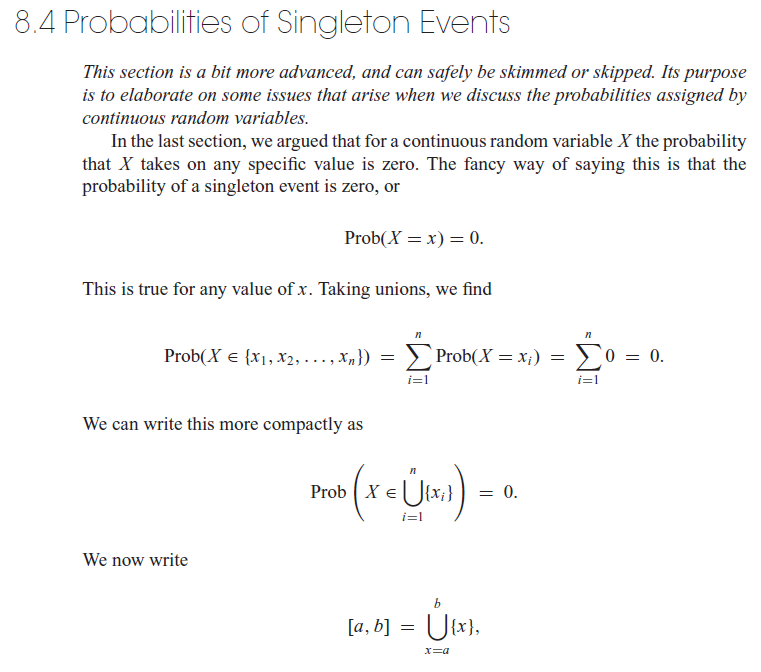 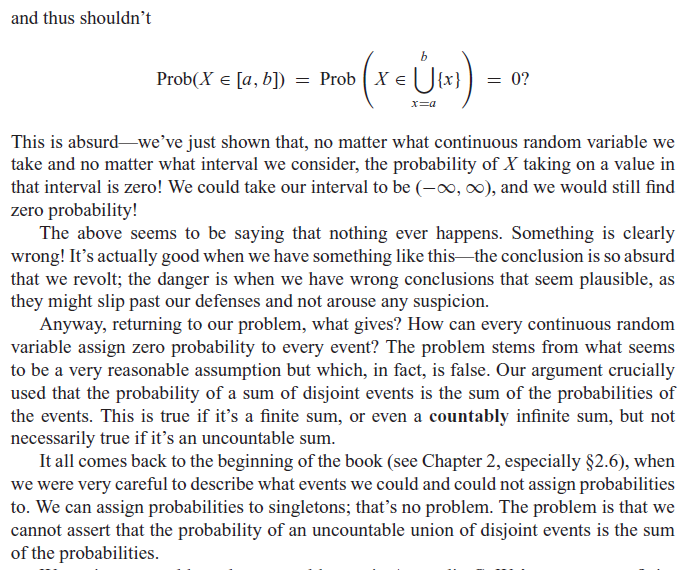 The problem here is that there isn't really any concept of an "uncountable sum" for you to have an intuition about! Summation is initially defined as a binary operation, then extended to finite sums by induction, and then extended to countable sums by taking limits. That is as far as it goes. The closest analogy we have to a "sum" over an uncountable set is the integral. We can make some valid probability statements involving the integral that are similar to the quoted claim, and involve integration as a kind of "uncountable sum". Below I will show what you can and can't validly say.

What we can say

Using integration as our version of the "uncountable sum", there is a rough analogy that holds here in probability theory that mimics the intuitive properties put forward in the quote section. Suppose we have a continuous random variable $X$ with quantile function $Q_X$ and density function $f_X$. Then the norming property of probability gives:

This means that the "uncountable sum" (actually an integral) over a bunch of outcomes with zero probability can give us any probability value we want between zero and one. This occurs because our "sum" is really an integral that is "summing" an infinite number of infinitesimally small values. That is essentially what this kind of "intuitive" description is pointing to.

What we can't say

The reason this does not work is that $\mathbb{P}(X=x) = \int_x^x f_X(r) \ dr \neq f_X(x)$. When we extend from the countable domain to the uncountable domain, and start dealing with "uncountable sums" as integrals, we start using infinitesimals. These infinitesimals are small enough that they give zero probability when we integrate over a single value, but they are actually larger than zero, so when we integrate over a larger (uncountable) set of them, they can give a positive value.

This is a contradiction with

A similar question on maths.stackexchange is the following:

The solution to the paradox is in considering whether the terms of the operation are correctly used. What is $0$ and what is $\infty$? Are they correctly used, or are they misinterpreted due to some ambiguities?

"Our argument crucially used that the probability of a sum of disjoint events is a sum of the sum of probabilities of the events. This is true if it is a finite sum, or even a countably infinite sum, but not necessarily true if it's an uncountable sum."

The argument about the infinite sum is not wrong.

It could be problematic that in the shared text the author says first "we cannot assert the probability of an uncountable union of disjoint events is the sum of their probabilities" (which is true) and then says "an uncountable sum of zeros can be any number between 0 and 1." The last statement is a reasonable informal/intuitive way to think about it but an "uncountable sum of zeros" isn't generally a valid mathematical object and definitely isn't valid in this context. Maybe later in the text that is clarified. I would worry that the average reader would see this and just be perplexed, thinking that uncountable sums of zeros are a coherent mathematical thing in other contexts and can be equal to whatever we want (in a mathematically coherent way). The concept of an "uncountable sum of zeros" is simply not defined generally speaking (it is defined in some contexts, but always gives a sum of zero then).

It's important to understand that any time we are talking about "uncountable sums of zeros" in this context of probability, we are talking informally and intuitively and not about formally existing mathematical objects. Generally, it is important to distinguish between informal ideas and formal mathematical objects with the latter being described according to established axioms, definitions, etc.

Consider the Cantor set $C$ and the set of irrationals $A=[0,1]\cap\mathbb Q^c$. If we are considering $X$ to be a uniformly distributed random variable in $[0,1]$, then $P(X\in C)=0$ and $P(X\in A)=1$ (the Lebesgue measure of these sets is firmly established, and that is identical to their probability under the uniform distribution). So these probabilities are not well-defined as uncountable sums of zeros. Similarly we can create an uncountable set of any probability between 0 and 1 that will similarly be thought of as giving an uncountable sum of zeros equal to its probability. E.g. the fat Cantor set $C_{1/4}$ with middle bits of length $1/4^n$ removed at each stage has measure $1/2$ gives $P(X\in C_{1/4})=1/2$. We can construct fat Cantor sets of any measure between 0 and 1, and each is uncountable.

Not the answer you're looking for? Browse other questions tagged probability self-study set-theory or ask your own question.

23
Constructing a discrete r.v. having as support all the rationals in $[0,1]$

30
Two dice rolls - same number in sequence
44
What is it meant with the $\sigma$-algebra generated by a random variable?
11
If the sum of the probabilities of events is equal to the probability of their union, does that imply that the events are disjoint?
1
puzzle in derivation of entropy of sum
10
Why is the sum of probabilities in a continuous uniform distribution not infinity?
2
Intuition for expectation of discrete random variable that takes positive integers
3
Are the number of failures in an almost surely converging sequence guaranteed to be finite?