How to derive Camera Jacobian

I'm dealing with a Kalman Filter situation, trying to track points in 3D using cameras, each of which can represent a 3D point as a 2D projection according to:

I'd really like this to be in the form

I've seen this $H$ called the "observation matrix" and in other cases the "Jacobian". But Jacobian would imply a structure like

So I guess I have a few questions:

I've made some progress.

First, my camera equation was definitely wrong: I was missing a division by range to object. This video is what caused me to see the light. Really:

If you follow the Jacobian equation that I left above in the question (very carefully, taking derivatives w.r.t. $x$ and friends rather than $x'$ and other friends) through a page and a half of calculus and simplifying linear algebra, you eventually end up with

Note that you can optionally include translation before rotation in equation (1), and it makes no difference to the derivatives because $x$, $y$, and $z$ don't appear in the translation term.

Second, there is a distinction to be made between system evolution and observation functions and the Jacobians. These tend to blur together because in the linear case multiplying by the Jacobian is the same as evaluating the function. Take the example $y_1 = ax_1 + bx_2$, $y_2 = cx_1 + dx_2$. Then we can write the system as:

This is convenient if you need to both find $\vec{y}$ from $\vec{x}$ and do other things like project covariance matrices around, but in a nonlinear system you do these things by separate methods: 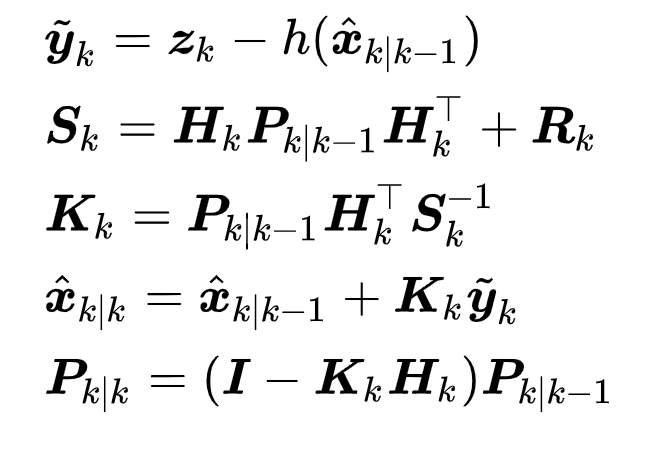 Notice the first line uses $h(x)$, but on subsequent lines we use the Jacobian $H$ evaluated at $x$. Likewise at the update step we use $f(x)$ to evolve the system and $F$ evaluated at $x$ to update covariance.

Now to specifically answer my questions:

2
Why are covariance matrices projected by both right and left multiply?