Now I am wondering why this is the case. Let's have a look at this blue time series: 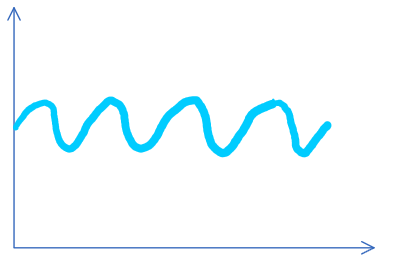 I personally would argue that it has a constant expected value which is just the mean in this case because on average this is the value of the time series. How can I show that this time series in fact does not have a constant expectation value. I do not have any further information about the time series but just the values themselves. How could I calculate the expectation value for every t and show that they are not constant for every t which would imply that this time series is not stationary.

I'd appreciate every further comment and would be quite thankful for your help.

Reminder: As this question is really important for me and I am not entirely satisfied with the answers given so far, I will award a bounty for a more detailed answer. I'll be quite happy for your help.

For instance, the image below shows a time series that is seemingly trend stationary for $t<0$ but differs for $t>0$. 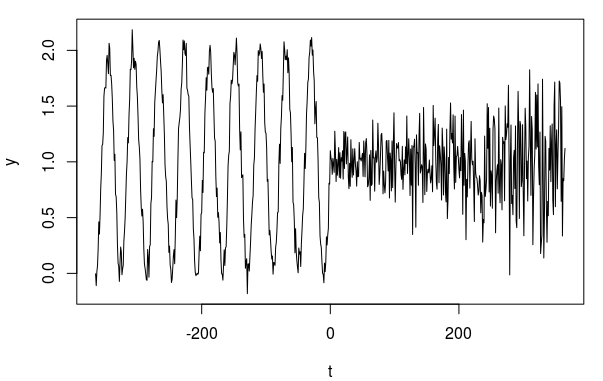 To know whether a time series is stationary requires not just the data, but also some assumptions about a theory for the process that generates the time series.

Then you can test whether

Even when the data is not stationary you can still fit a model to it. But it has some problems for some of the fitting methods.

If you by a time series means a concrete series of numbers/observations attached to some time points, then it is neither stationary nor not stationary, neither does it have an expectation (or not!) Those concepts apply only to time series models, that is, some probability model for a time series.

To advance from here, you could tell us a model, then we can answer ... but more realistically, you do not have a model yet, you have some observations from some phenomenon, an the question should really be if a stationary time series model for that process is reasonable. An answer to that depends on the process, the phenomenon, not just the numerical data.

To followup on the last bullet point, let us simulate some (stationary) ar(2) model with cyclic behavior. I am following the example used in this excellent discussion of difference between seasonality and a cyclic series (some of the comments to your post indicates that you really have seasonality, not cyclicity.) The simulation is done in R: 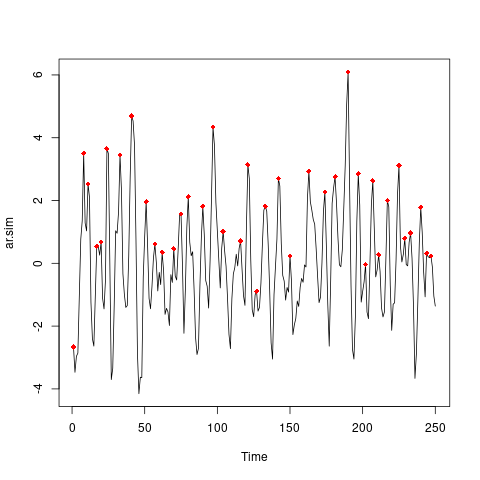 The red diamonds in the plot indicates the position of local maxima, and looking at the distance between them could be a way to study period/cycle length. But that is to subjective, so we look for some other approach.

The periodogram is the tool of choice here, trying to estimate which fraction of the total variance in the series comes from different cycle lengths:

Usually this is plotted on the log scale, to show better the details also in the low frequency part of the plot. But here we are more interested in seeing where the main contributions to total variance is, and the a linear scale is more appropriate, since then area under the curve is directly proportional to proportion of variance: 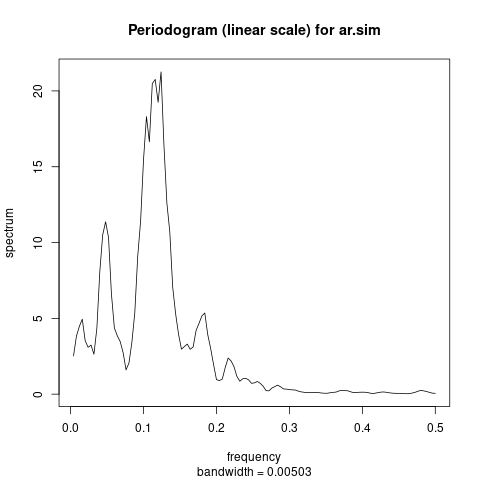 We can read the main contribution periodicities from the plot. Since period is inverse of frequency:

Not the answer you're looking for? Browse other questions tagged time-series expected-value stationarity seasonality spectral-analysis or ask your own question.

117
Why does a time series have to be stationary?
14
What is a second order stationary process?
3
Can stationary time series contain regulary cycles and periods with different fluctuations
0
Which property of stationarity is violated by a time series with regular cycles?