Why is $R_t$ (or $R_0$) and not doubling rate or time the go-to metric for measuring Covid-19 expansion?

In my head, the natural way to measure the expansion speed of an epidemic across populations of different sizes is simply fitting an exponential over recent infection numbers (with any strategy), getting a parameter $C$ for $I(t) \approx e^{Ct}$. This gives useful practical information such as the doubling time.

From what I understand, the effective reproduction number $R_t$ is a quantity that is related but not equal to $C$. In fact, in some simple models $C$ is a function of $R_t$ and of the mean infectious period $\tau$. (which makes sense, as $R_t$ is a dimensionless unit and would be the same for two different epidemics that are obtained one from the other only by rescaling time).

The mean infectious time $\tau$ is a quantity that cannot be estimated directly from the data, and must be provided as an external parameter. This parameter is not trivial to estimate in itself; for instance the abstract of this paper gives an estimate of $6.5 - 9.5$ days for Covid-19.

The true relationship between $R_t$ and $C$ is probably even more complicated because it also depends on how these infections are distributed across the infectious period.

Intuitively, the difficulty in estimating $\tau$ should reflect in $R_t$ having a larger error bar than $C$. Indeed, I have seen in the media some estimates of $R_t$ with ridiculously large confidence intervals; for instance this one for an Italian region with 4M inhabitants was published by an Italian newspaper on their website. 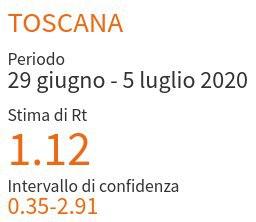 So, here is my question: wouldn't it be simpler, and more useful, to use $C$ (or, equivalently, the doubling time) as a measure of the expansion speed of an epidemics? This quantity would probably be more reliable to estimate, since it does not depend on extraneous parameters such as $\tau$.

$R_t$ has the property that an epidemic is spreading if it is larger than $1$, and contracting if it is smaller than $1$; $C$ has the same property with $0$ being the discriminating value. So from the point of view of giving an easy reference value both are equally effective.

So why do many governments and state agencies routinely report $R_t$ rather than the rate $C$ as their main measure, and use it to determine when measures have to be enforced? What makes it more useful than the doubling time?

The rate of expansion is useful to know, but the advantage of $R_t$ is that - although more difficult to measure - it provides a more mechanistic description of the transmission process, and hence it is more useful from the point of view of disease control. $R_t$ can be formulated as

$R_t=cp\tau S$,
where
$c$ is the rate at which a typical person makes contacts with others
$p$ is the probability of transmission to a contacted person if that person is susceptible
$\tau$ is the mean infectious period
$S$ is the proportion of the population susceptible.

So, if $R_t$ is currently $2$, say, then to achieve $R_t<1$ we could either reduce $cp$ (social distancing), $\tau$ (isolate infectious individuals), or $S$ (vaccinate) e.g. vaccinating more than $50\%$ of the currently susceptible population would be sufficient to achieve control.

As per the suggestion of the OP, here is my comment as an answer:

I would guess that in times when $R\approx1$ (e.g. here in Germany at the time of writing, Nov 2020), the doubling time is about infinite, as the situation is stable. Of course, when $R$ is slightly above 1, that is no longer true, but very small changes in $R$ should imply very large changes in the doubling time, which may not be a very effective way to communicate changes in the pandemic situation.

Indeed, during the first wave of the pandemic reporting often happened through doubling time, which was however discarded when the first wave came under control. Here is a source commenting on this step (in German).

The reproduction rate $R$ tells by which factor the infections multiply each step. But it is not a rate of growth with just different units (per generation instead of per time) because simultaneously infected people will heal or die and the net growth needs to account for those two effects together.

So $R(t)$ tells a slightly different story than growth rate. In terms of the SIR compartmental model you can consider two rates: $\beta$ the rate by which new infectections occur, and $\gamma$ the rate by which infections disappear (due to healing or death). The (net) growth rate is the difference of these two $C= \beta -\gamma$. The reproduction rate is the ratio of these two $R = \beta/\gamma$.

In the image below you see a schematic for the growth. The nodes represent infected people and from each node, we draw lines to people that will be infected next. In this example, every infected person will infect two new people. 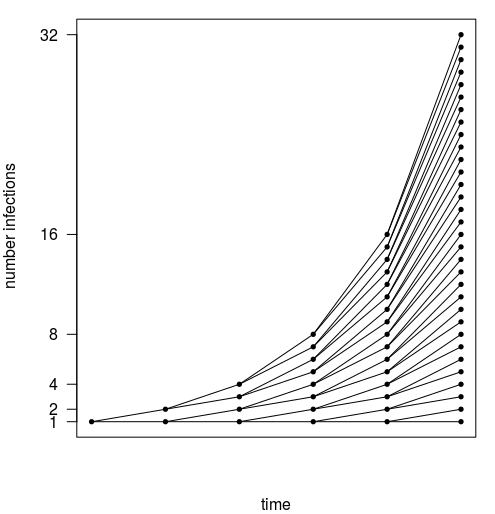 If you know $\tau$ the time between infections (which can be viewed differently e.g. serial interval or generation interval) then you can relate the reproduction number with the growth rate

There are other relationships possible for more complicated models. The point is mainly that you do not get a simple difference by a scale factor $C(t) = \frac{R(t)}{ \tau }$. The $-1$ term occurs because you do not only have growth/reproduction but also decrease due to people becoming better or dying.

The $R(t)$ value is a highly simplified measure. In most models, it represents an average reproduction, but the reality is that there is inhomogeneity and this may have a big influence on conclusions made in relation to $R(t)$ (the same arguments apply to $C(t)$).

Not the answer you're looking for? Browse other questions tagged estimation epidemiology covid-19 or ask your own question.

11
Fitting SIR model with 2019-nCoV data doesn't conververge
9
Is there a way to calculate the riskiest places to be infected by COVID-19?
3
A new strain of covid-19 is 70% more infectious/transmissible. What does that mean and how has it been estimated/measured?
1
How to estimate the change of rate of COVID-19 infections when accounting for vaccine effectiveness and increased transmissibility of mutated strains?
1
How to calculate the doubling rate for infections?
1
looking for the probability of infection (for Covid19) vs the number of days to the onset of symptoms

0
Is an SLA pulled by just the calls answered by a certain group and not for the whole Queue valid?
5
May a not-significant regression coefficient be used for the estimation of yhat and the calculation of residuals?
1
GARCH specification - why are $\sigma_t^2$ and $\epsilon_t^2$ not the same?
1
How to calculate the doubling rate for infections?
3
Understanding the relationship between R0, doubling time, and the epidemic curve
1
How to estimate the change of rate of COVID-19 infections when accounting for vaccine effectiveness and increased transmissibility of mutated strains?