In a multi-level model, what are the practical implications of estimating versus not-estimating random effect correlation parameters?

In a multi-level model, what are the practical and interpretation-related implications of estimating versus not-estimating random effect correlation parameters? The practical reason for asking this is that in the lmer framework in R, there is no implemented method for estimating p-values via MCMC techniques when estimates are made in the model of the correlations between parameters.

For example, looking at this example (portions quoted below), what are the practical implications of M2 versus M3. Obviously, in one case P5 will not be estimated and in the other it will.

Borrowing from @Mike Lawrence's answer (those more knowledgeable than I are free to replace this with full model notation, I'm not entirely confident I can do so with reasonable fidelity):

P2: Random effect intercepts for V2 (i.e. for each level of V2, that level's intercept's deviation from the global intercept)

P3: A single global estimate for the effect (slope) of V3

P4: The effect of V3 within each level of V2 (more specifically, the degree to which the V3 effect within a given level deviates from the global effect of V3), while enforcing a zero correlation between the intercept deviations and V3 effect deviations across levels of V2.

Answers derived from a sufficiently large and broad simulation along with accompanying code in R using lmer would be acceptable.

Consider the sleepstudy data, included in lme4. Bates discusses this in his online book about lme4. In chapter 3, he considers two models for the data.

The study involved 18 subjects, studied over a period of 10 sleep deprived days. Reaction times were calculated at baseline and on subsequent days. There is a clear effect between reaction time and the duration of sleep deprivation. There are also significant differences between subjects. Model A allows for the possibility of an interaction between the random intercept and slope effects: imagine, say, that people with poor reaction times suffer more acutely from the effects sleep deprivation. This would imply a positive correlation in the random effects.

In Bates' example, there was no apparent correlation from the Lattice plot and no significant difference between the models. However, to investigate the question posed above, I decided to take the fitted values of the sleepstudy, crank up the correlation and look at the performance of the the two models.

As you can see from the image, long reaction times are associated with greater loss of performance. The correlation used for the simulation was 0.58 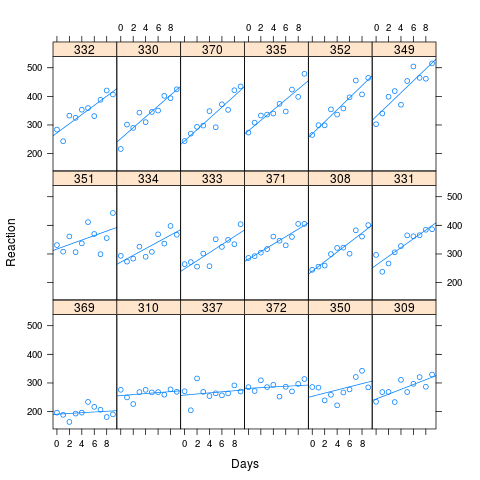 I simulated 1000 samples, using the simulate method in lme4, based on the fitted values of my artificial data. I fit M0 and Ma to each and looked at the results. The original data set had 180 observations (10 for each of 18 subjects), and the simulated data has the same structure.

The bottom line is that there is very little difference.

So why does this happen? @gung guessed, reasonably, that failure to include the possibility of a correlation forces the random effects to be uncorrelated. Perhaps it should; but in this implementation, the random effects are allowed to be correlated, which means that the data are able to pull the parameters in the right direction, regardless of the model. The wrongness of the wrong model shows up in the likelihood, which is why you can (sometimes) distinguish the two models at that level. The mixed effects model is basically fitting linear regressions to each subject, influenced by what the model thinks they should be. The wrong model forces the fit of less plausible values than you get under the right model. But the parameters, at the end of the day, are governed by the fit to actual data. 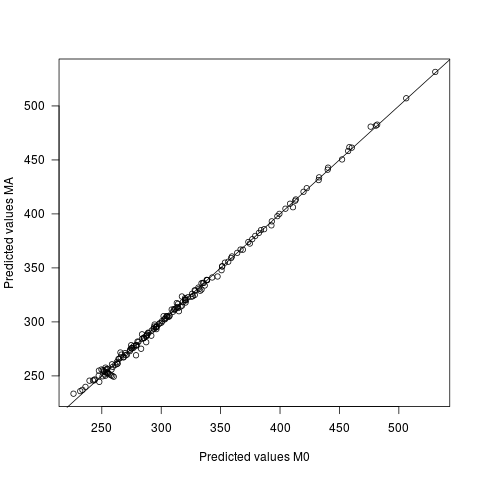 Here is my somewhat clunky code. The idea was to fit the sleep study data and then build a simulated data set with the same parameters, but a larger correlation for the random effects. That data set was fed to simulate.lmer() to simulate 1000 samples, each of which was fit both ways. Once I had paired fitted objects, I could pull out different features of the fit and compare them, using t-tests, or whatever.

We see that one can affect the estimated correlation between the random intercept and random slope by "shifting" the random predictor variable. Look at the results from models fm1 and fm2 below:

De-correlating random intercept-slope covariance for LMMs is discussed in Dr. Jack Weiss's lecture notes here. Weiss notes that reducing the variance correlation in this fashion can sometimes help with model convergence, among other things.

The above example varies the random correlation (parameter "P5"). Partially addressing the OP's Q3, we see from the above output that:

Not the answer you're looking for? Browse other questions tagged r mixed-model lme4-nlme random-effects-model or ask your own question.

187
R's lmer cheat sheet
99
How scared should we be about convergence warnings in lme4
13
What to do with random effects correlation that equals 1 or -1?
15
Specifying a covariance structure: pros and cons
9
Books on statistical ecology?
12
How can one do an MCMC hypothesis test on a mixed effect regression model with random slopes?
1
What is a case where including random correlation parameters decreases the error on the fixed effects?

3
Confidence-intervals for conditions tested with a mixed-effects model
6
Estimating correlated parameters with multi-level model
6
Where is the correlation parameter in the linear mixed-effect model equation?
2
How is correlation between fixed intercept and fixed effect calculated in lmer of R, lme4?
25
When are zero-correlation mixed models theoretically sound?
2
What are the consequences of including unnecessary random effects?