Recently, Nassim Nicholas Taleb made this post about the recent Danish mask study, a randomized controlled trial which concluded that the proportions of newly diagnosed coronavirus infections was not significantly different among the group with masks and the non-mask wearing control group (42/2392=1.8% vs. 53/2470=2.1%), based on a 2-tailed p value from a logistic regression.

Taleb points out that if you focus just on the cases where infection has been confirmed by a qRT PCR test you get 0/2392 vs. 5/2470. He writes "Now consider the more obvious error. What are the odds of getting 0 PCRs vs 5 from random?

To me, this calculation doesn't seem to make much sense, since that binomial PMF-based calculation ignores the sampling uncertainty on 5/2470. To this, Taleb responded "I don’t do P values: https://arxiv.org/pdf/1603.07532.pdf", only to later add this Monte Carlo double Bernoulli based calculation, in Mathematica notation, in which he obtains a 1-tailed p value of

Could somebody shine a light though on what exactly Taleb was calculating here? If he is trying to accomplish a 2-sample binomial test using Monte Carlo here I don't quite understand where the 2400 is coming from and why there is no Bernoulli in there with a 0/2392 expectation (which in itself would be problematic as one would have zero variance then). For a 2-sample MC binomial test I would rather have expected something like (in R, and using a +1 adjustment of all counts to avoid the p=0 binomial expectation in one group) :

but it seems he instead tries something like (I corrected the 2400, which presumably was a typo, and also changed the > to a >=):

which I believe is just wrong, right? If anything, I would have found this more logical :

though I am not sure if this would be an accepted way to carry out such a 2-sample binomial test (it would seem sort of the Monte Carlo version of Liddell's 2x2 contingency table test).

Taleb himself was not very helpful, noting that we was just calculating a "double column table joint distribution a la Fisher" and then remarking in his typical blunt style "You seem to be very very ignorant, repeating formulas like a parrot, not understanding what probability is about. I’ve stopped engaging with you.".

I did tell him that because a priori masks could also have made things worse (e.g. when badly used) it was safer to use 2-tailed tests. And that because of complete separation you can't do a regular logistic regression (binomial GLM) (which is what the authors used in their paper), e.g. in R :

To solve this, we could add 1/2 to our observations as a continuity correction (equivalent to using a Jeffrey's prior in a Bayesian binomial GLM I believe):

I then pointed out that it would be better to do an exact-like logistic regression, e.g. in R:

And that this would also be very close to the result of a 2-tailed Fisher exact test, based on the hypergeometric distribution, which also gives a 2-tailed p value of 0.06:

Even though a Fisher exact test would assume both the row and column margins to be fixed, which is in fact not quite correct here, as only the row margins are fixed, and this would make a logistic regression / 2-sample binomial more appropriate.

Another alternative that I pointed out was a Firth's logistic regression, which would give a 2-tailed p value of 0.11 :

To that he responded "Please don’t give me libraries. Please provide derivations." (never mind that there is no closed-form solution even for the maximum likelihood solution of a binomial GLM).

Anyway, would somebody here be able to give some feedback on this whole discussion, preferably from a formal statistical angle, so that it could potentially please Taleb? And specifically also on the issue of complete separation and how to best deal with it in 2-sample binomial tests or logistic regressions, and what the best options would be there to obtain exact p values.

Though that exact.test function seems to have quite a lot of different methods, and I am unsure myself which would be best (in particular for the case with low counts and a group with a binomial expectation of p=0), as I haven't dug into the details of all those methods. E.g. method="Z-pooled" gives more optimistic p values, closer to the p-value I get via the Liddell-like MC method to test the proportions against a common p=5/(2392+2470) above:

Likewise, using library(exact2x2) and using method="FisherAdj" I am getting such more optimistic p values :

Thoughts on which of these tests would be most appropriate here would be welcome.

On another note, if one would take into account false-negative PCR tests (in the same way that Taleb likes to take into account false-positives in the antibody tests) this might change conclusions quite a bit... Also pretty sure that one would need to know which individuals were subjected to each type of test, and what the counts were for all the other respiratory viruses they were tested for.

Your 2-sided test implicitly allots exactly half of your 5% significance level to "masks are harmful" ($M_-$) and the other half to "masks are beneficial" ($M_+$). To a Bayesian like Taleb that might suggest that you aren't properly thinking about your prior, because it implies that the amount of evidence it would take you to accept $M_-$ is exactly equal to the amount it would take you to accept $M_+$, even though $M_+$ is intuitively more likely (to me, at least - if you had asked me a year ago whether wearing a mask would be more likely to increase or decrease the risk of catching a respiratory virus, I would have said decrease).

And it seems to me that since the single independent variable was binary, using Firth's logistic regression over Fisher's exact test doesn't add much value.

But your core point was that most of the doubt that mask wearing reduced PCR infections in the trial comes from the presence of uncertainty in the estimate $p=\frac{5}{2470}$. This seems unarguable.

Taleb says: "You don’t get it. BTW I added a double column table joint distribution a la Fisher." Maybe that's his way of saving face while admitting that you raised a valid criticism.

This calculation is justified by the presumption that all $2470+2392$ subjects were independently randomized into the test and control groups. The terms in the numerator count the ways in which all five positive results could have ended up randomly in the first group or the second group. The denominator counts all possible five-element subsets of the group of all subjects, all of which are equally likely under this randomization assumption.

For those who maintain (incorrectly, IMHO) that a one-sided test is appropriate here, I have shown the values of each of the two separate fractions.

I believe this simple result is equivalent to both Fisher's Test and Boschloo's test.

bearing in mind he appears to have approximated $2392$ by $2400$ (which makes little difference). This places his result of $0.03483$ approximately $1.9$ standard errors below the true value, well within what one would expect of such a simulation.

If you want to acquiesce to
(i) avoiding methods that do p-values
(ii) producing a more "bespoke" test for this problem
(objectives mentioned by Taleb, not necessarilly something you agree with)

One solution would be to simulate and find parameters by rejection sampling (actually approximate Bayesian computation).

When we look at the posteriors, the multiplier distribution has clearly shifted left and away from the original center at 1. However it is still true that the probability that the multiplier is above 1 is about 17% (far above the threshold of 5% we set ourselves). Everybody wins! 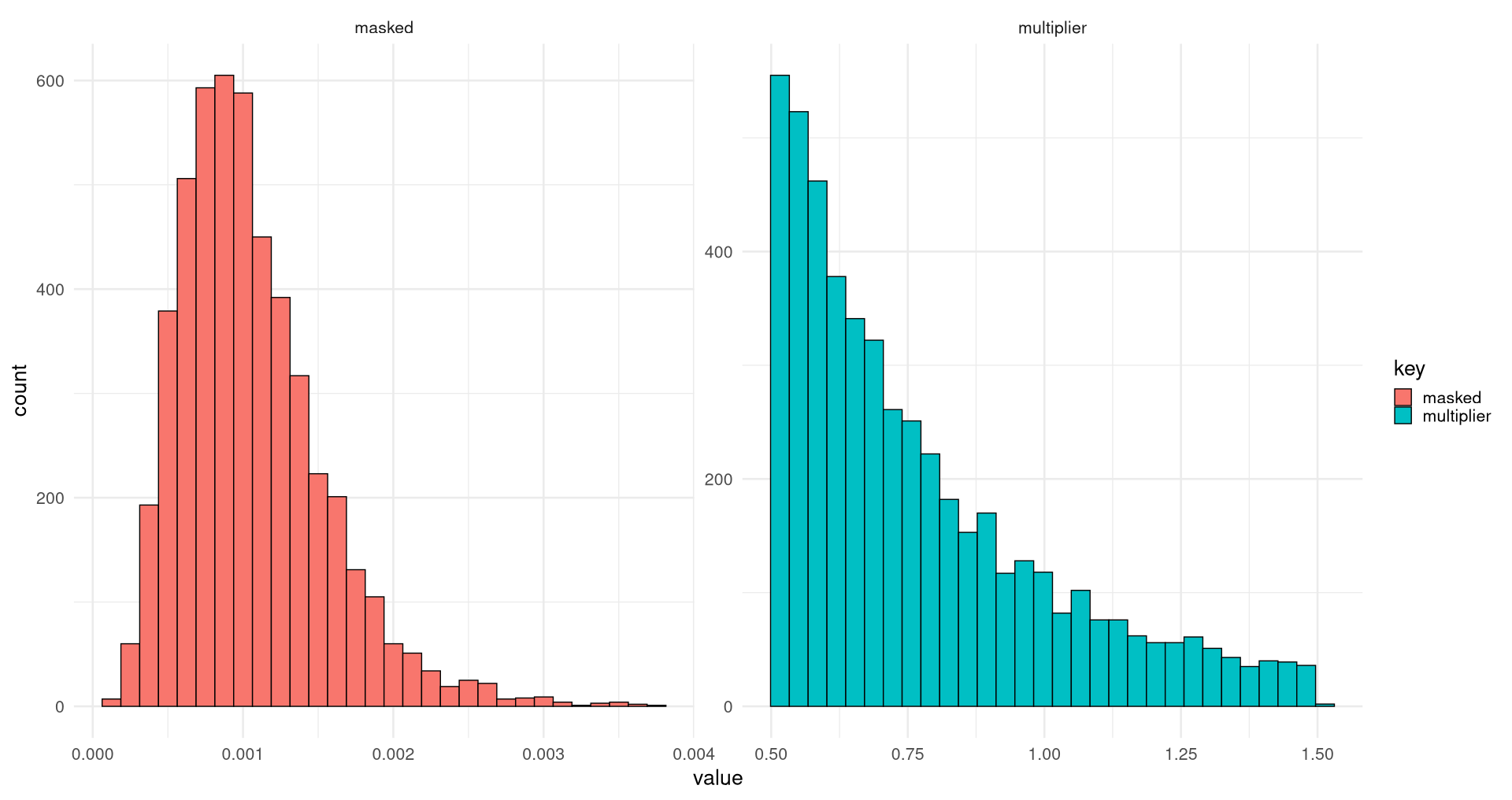 Not the answer you're looking for? Browse other questions tagged logistic binomial-distribution contingency-tables fishers-exact-test separation or ask your own question.

196
How to deal with perfect separation in logistic regression?
38
Which statistical model is being used in the Pfizer study design for vaccine efficacy?

6
Perfect separation error message for glm with binomial but not with quasibinomial family
15
Which test for cross table analysis: Boschloo or Barnard?
2
Fishers exact test meaning of "greater" and "less"
3
Dealing with quasi-complete separation in General Additive Model?
5
Proportion data with number of trials known (and separation?): GLM or beta regression?