What is wrong with Shiva Ayyadurai's statistical theory in this court filing?

Dr Shiva Ayyadurai ran in the Republican primary for Massachusetts senator in 2020, losing this race to Kevin O'Connor. He then filed a lawsuit alleging irregularities in the vote count. The suit is currently pending.

His legal filing is embedded on this page https://vashiva.com/no-one-person-one-vote/ . In the document (on page 21, the previous pages can thankfully be skipped) he sort of makes an actual statistical argument, which I will try to summarize below.

I personally find his arguments extremely questionable, but if anyone with a better statistics background would be willing to tease apart specifically what is wrong, I'd be fascinated to hear it.

Briefly, Ayyadurai provides a histogram counting the number of precincts in which he received N votes vs number of votes: 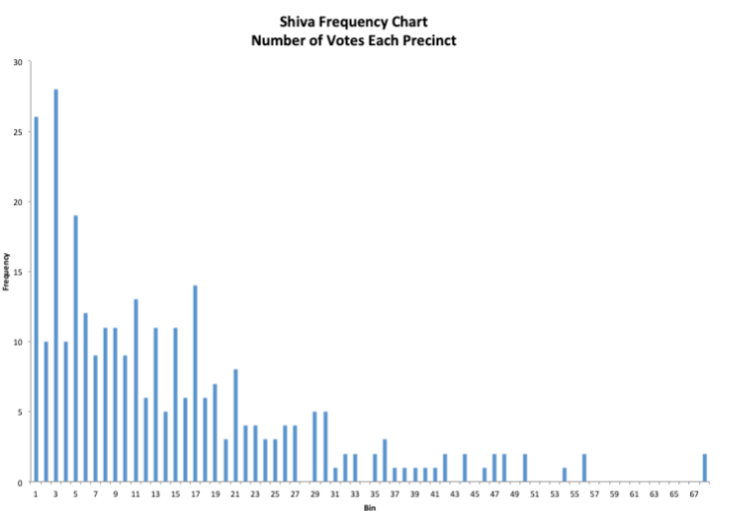 He then proceeds to argue that:

The question herein is how likely is it that my vote count in Suffolk County could generate 9 or more “High-Low” pairs for the first 11 pairs in the histogram, assuming the reported results are fair and unbiased. To answer this question, I have modeled vote counts by precinct and candidate using a binomial distribution –of 298 precincts x 2 candidates for 596 total distributions.

9 or more “High-Low” pairs should only appear in bins 1-22 of the histogram once in every 741 elections!

So my question is: what statistical fallacies have been committed in this analysis?

Seems to be a lot of cherry-picking in this analysis.

The "high-low pair" concept looks like his own invention. I couldn't find a definition. Your definition seems plausible but it doesn't match up with what he says about the histogram associated with O'Connor, his opponent:

In Kevin O’Connor’s histogram and corresponding table chart, the incidence of “High-Low” pairs is much less pronounced

According to your definition, O'Connor's histogram actually has more high-low pairs in the first 22 buckets: I count 11 buckets whose bar is higher than the previous bucket. Hard to say more here without being sure of the definition.

He claims that his votes were reweighted by multiplying by 0.666 and rounding. Since this maps multiples of 3 to even numbers and everything else to odd numbers, he says it explains why among the first 22 buckets, the even buckets are smaller than the odd buckets. But it doesn't explain why the difference between even and odd vanishes for buckets above 22 (which make up more than half the x axis).

Overall, it's a very unconvincing argument.

Not the answer you're looking for? Browse other questions tagged self-study fallacy or ask your own question.

248
What are common statistical sins?
18
War stories where wrong decisions were made based on statistical information?
2
What is wrong with teleoanalysis (if anything)?
0
What is wrong in calculating probability in this way?
3
Statistical theory proof intuition (UMVU estimators)
3
What is alpha in Vapnik's statistical learning theory?
13
Is there a formal name for this statistical fallacy?