Understanding the whiskers of a boxplot

I have a question regarding the interpretation of the whiskers of a boxplot. I have read the following: "On the top and bottom of the rectangle, the “whiskers” show the range of 1.5 times the distance between the 0.25- and 0.75-quantiles", but do not entirely understand what is meant by "distance".

It can't be that the probability mass is meant, since between the 0.25 and 0.75 quantile we obviously always have the same percentage of data. What then is the idea?

This is to be done in a robust way: that means the boxplot should not look appreciably different when one, or a relatively small portion, of the data values is arbitrarily changed.

The solution adopted by its inventor John Tukey is to use the order statistics--the data as sorted from lowest to highest--in a systematic way. For simplicity (he did calculations mentally or with pencil and paper) Tukey focused on medians: the middle values of batches of numbers. (For batches with even counts, Tukey used the midpoint of the two middle values.) A median is resistant to changes in up to half the data on which it is based, making it excellent as a robust statistic. Thus:

(Those old enough to remember the hippie argot of the '60s will understand the joke.)

Since the spread is a difference of data values, these fences have the same units of measure as the original data: this is the sense of "distance" in the question.

We can at least identify the extreme values, and might do well to identify a few more.

Consequently, the default appearance of a boxplot is to extend the whiskers to the most extreme non-outlying data values and to identify (through text labels) the data comprising the ends of the whiskers and all outliers. For example, Tupungatito volcano is the high adjacent value for the volcano heights data depicted at the right of the figure: the whisker stops there. Tupungatito and all taller volcanos are separately identified.

So that this will display the data faithfully, distance in the graphic is proportional to differences in data values. (Any departure from direct proportionality would introduce a "Lie Factor" in Tufte's (1983) terminology.) 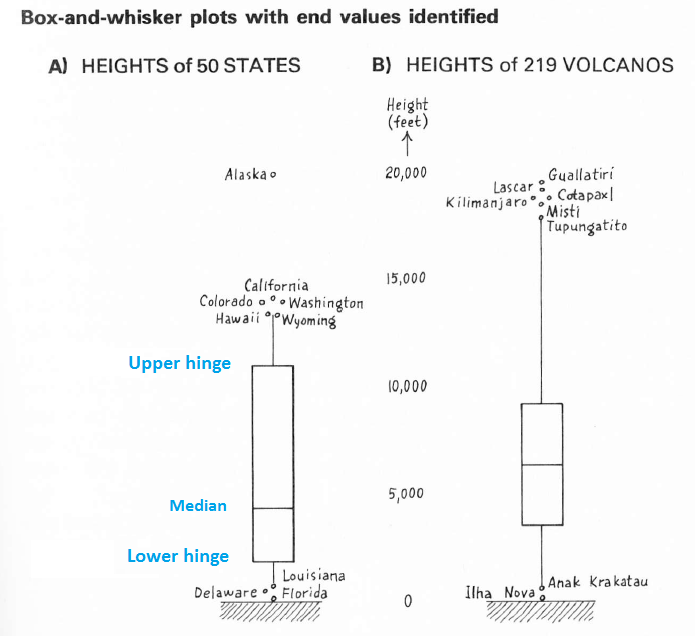 These two boxplots from Tukey's book EDA (p. 41) illustrate the components. It is noteworthy that he has identified non-outlying values at the high and low ends of the States dataset at the left and one low non-outlying value of the Volcano heights at the right. This exemplifies the interplay of rules and judgment that pervades the book.

4
How are whiskers in a Boxplot of different lengths?

2
Inter quartile range and outliers in boxplot with logarithmic y-axis
3
Boxplot interpretation: is it correct that a boxplot is missing a whisker?
11
Confused by location of fences in box-whisker plots
4
Visualizing composititional time series with negative values and meaningful totals
2
Boxplot with whiskers close to zero
3
ANOVA - Homogeneous variance, what to look for in a boxplot
3
How to deal when you have too many outliers?
2
Interpreting Violin Plots