Spearman correlation in the presence of many ties - how to spot a problem?

I'm testing the hypothesis that there's a monotonic relationship between two variables. I think I should use a Spearman rank correlation test, since my data don't necessarily meet normality assumptions & have many outliers. However, there are many ties in the independent variable. How can I tell whether the ties are causing me a problem? 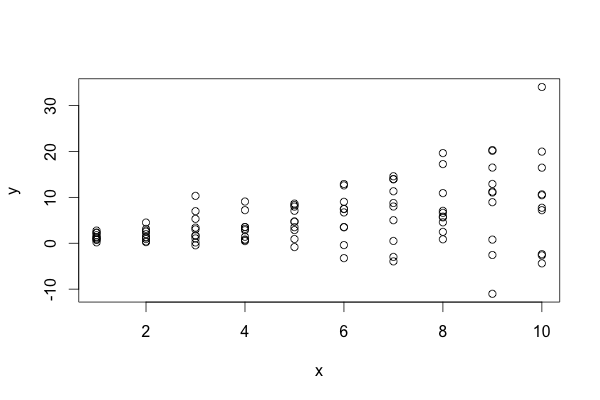 One approach I can think of is to add a small random number to each x value many time, and look at the mean/median p-value, like so:

Does that method seem reasonable? Is there a previously-described method to assess the effect of ties on Spearman's rho, or a similar correlation method that does better with large numbers of ties?

Use a permutation test. You only need to permute one of the variables independently of the other; here, the response is permuted. Because the relationship in the example is strong, only a small number of permutations are needed (1000 in the example below).

suppressWarnings quiets any complaints from cor.test that it cannot compute a p-value due to ties.

Not the answer you're looking for? Browse other questions tagged r correlation monte-carlo spearman-rho or ask your own question.

2
Correlation between a continous and integer variable