The undirected network below shows the interaction of workers (blue nodes) with products worked on during a time period. The thickness of the edges/arcs indicates how much time the worker spends on a product during the time period.

Is there a (centrality) measure, which indicates how isolated a worker is or that indicates the worker's crowdedness (ideally calculable in R)? In the graph one can detect sub groups of clustered workers but also fairly "lonely" worker. The graph was rendered using fruchterman reingold so I appreciate that this may be a biased view.

Any pointers would be very much appreciated. Thanks! 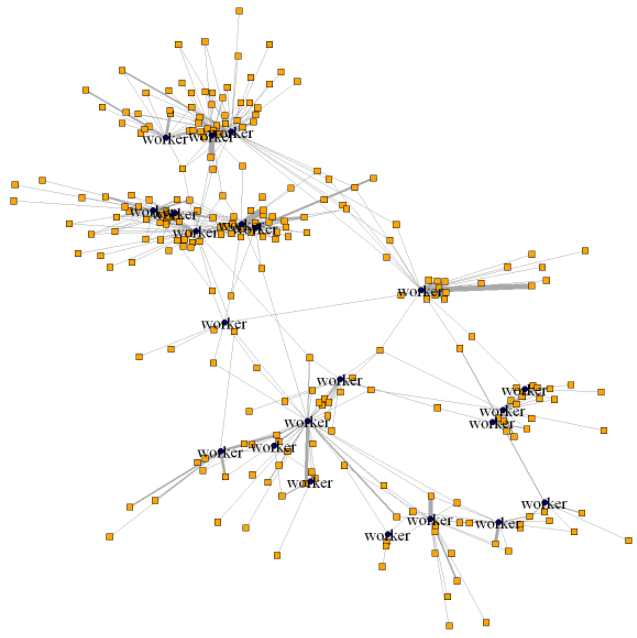 There are plenty of measures of centrality in networks, but in your case I would suggest the following.

I would measure how isolated a worker is with closeness centrality: it basically measure how close the worker is from all other nodes in the network, by measuring its distance to them.

I would measure crowdedness with either the pagerank, which may be seen as an extension of node degree in which the degree of neighbors, and the one of neighbor's neighbors, and so on, is taken into account. It reflects the probability to visit the worker if one follows links at random. It has the advantage of being fast to compute. I would also consider betweenness centrality, that measures how much a worker is on shortest paths between other nodes; a good proxy of what your are looking for, but it is somewhat computationally expensive.

Notice also that your graph is bipartite: it has two distinct node types, with links only between nodes of different types. The measures above work in this case, but you may want to take benefit of this bipartite structure to go further. For instance, you may consider the network of workers linked together if they worked on a same product. This is known as the projection.

Not the answer you're looking for? Browse other questions tagged r clustering networks social-network or ask your own question.