How to test assumptions with a categorical predictor (planned contrasts) in linear regression?

I am using regression with planned contrasts and would like to test statistical assumptions. Assumptions are normally tested on the residuals of the regression model, but in this case, I don't know if it makes sense because the predictor variable is categorical (i.e., group) and contrasts are only tested later (one contrast at a time, meaning two groups at a time).

For example, using the amazing performance package (which needs package see for the plot), we can see for the normality, homoscedasticity and homogeneity of variance plots, the observations cluster in three points only: 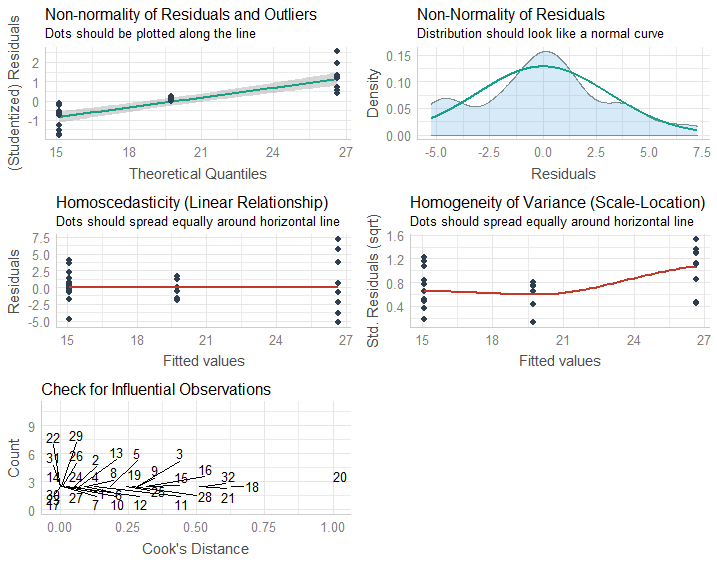 While normally the observations would be distributed more equally like this: 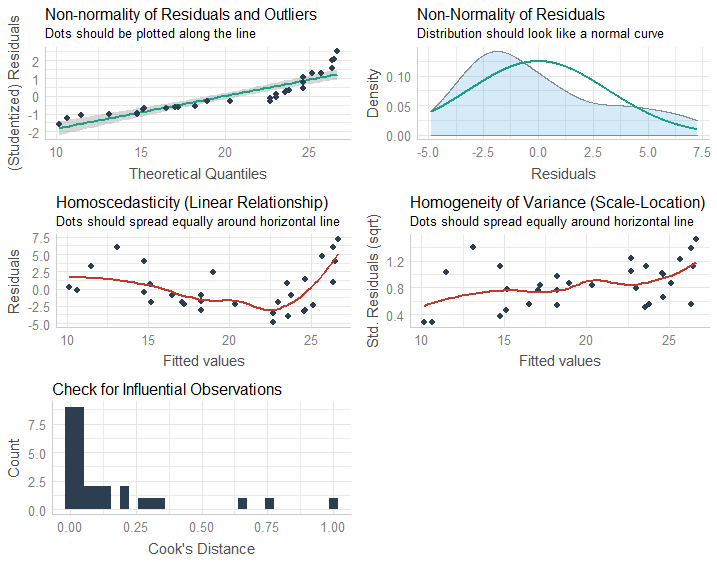 Which option below is the correct/best one, given the situation? (Feel free to suggest another one) (Edit: Also note that I am using the assumption of normality for the sake of simplicity and conciseness but I am interested in all assumptions for this situation)

(a) Assess normality of the dependent variable

(b) Assess normality of the residuals of the whole model

In the case of numerical predictors, there is typically little data within the subsets to allow meaningful investigation of the conditional distributions. That is why people often resort to looking at the residuals in such cases.

So your "method 3" looks ok, except (i) there is no need to look at residuals, just look at the raw data, and (ii) use the S-W test only as an afterthought. Instead, look mainly at the histograms and q-q plots, and use your subject matter knowledge.

Not the answer you're looking for? Browse other questions tagged r regression categorical-data assumptions contrasts or ask your own question.

0
Does the assumption of autocorrelation apply to linear regression with a categorical predictor?

4
2x2 ANOVA - assess violations of homoscedasticity & normality
7
Should I take the Shapiro Wilk test with a pinch of salt here?
29
How incorrect is a regression model when assumptions are not met?
2
Shapiro-Wilk says data is not normal, but histogram looks like that
1
Normal distribution assumptions in ANOVA vs. Linear Regression
0
are my residuals normally distributed?
0
What is the best way to assess normality in a large dataset?
0
Does the assumption of autocorrelation apply to linear regression with a categorical predictor?