How should I do clustering when I have a mix of single-element and time series features?

I'm trying to cluster together different short audio files based on the zero-crossing rate (an integer) and the energy, spectral centroid, and spectral bandwidth (time-variant values). I've decided to use these time series as features rather than just taking an average and using that as a feature because one of the goals is, for example, to cluster together the audio files which rise in pitch over time but decay in energy. I'm assuming that K-means clustering might not be the best algorithm here given that it's meant for low-dimensional spaces, and I'll at least need to do some specific preprocessing first (maybe not just because it's a time series but because it's audio). What should I look into using here for what I'm trying to do? Should I look into different features?

Cheers and thanks for any help!

TL;DR: For clustering time-series data, as a baseline, you can try using Dynamic Time Warping (DTW) as a distance metric for your favorite clustering algorithm, say $k$-means.

DTW is commonly used in applications like ASR (automatic speech recognition), and other sequence alignment problems. I believe the Python package tslearn implements DTW, though I have not used it myself.

At a very high level, DTW is a measure of how "aligned" two time-series are, so it can capture features like "rise in pitch over time + decay in energy;" i.e. two sequences are "close" if you can stretch/compress a source sequence in the time dimension into the target sequence. To compute this, let's define $x, y$ as sequences of length $n, m$ respectively, and $\pi = [\pi_1, \pi_2, \dots \pi_N]$, where $\pi_k = (i_k, j_k)$, a tuple of indices into $x, y$ respectively. Intuitively, $\pi$ defines a "path" through sequences $x, y$ by pairing up indices. Then you minimize the following objective:

where $d$ is some distance metric (say $\ell_1, \ell_2$). The final two constraints are just boundary conditions that specify that the path $\pi$ must align with the beginnings and ends of $x, y$ simultaneously; the top constraint specifies that indices $i_k, j_k$ must be monotonically non-decreasing in $k$.

This schematic from Wikipedia illustrates this quite succinctly: 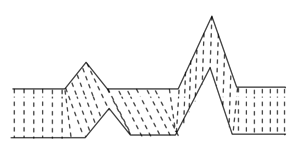 We can imagine each location where a dashed line originates/terminates as an element of a discrete time-series; these correspond to the various $i_k, j_k$ defined in $\pi$.

What about the curse of dimensionality?

More concretely, using nearest-neighbors search as an illustrative example, under reasonable assumptions about your data-generating distribution, data points tend to become uniformly distant from one another in Euclidean distance as your dimensionality (or in the context of time-series, sequence length) increases; i.e., most points are "almost-nearest" neighbors. DTW does not suffer as severely from this problem as sequence length increases. A more mathematical way to gauge the severity of the curse of dimensionality is shown in Section 3.4 of this paper.

Not the answer you're looking for? Browse other questions tagged machine-learning time-series clustering or ask your own question.

317
Why is Euclidean distance not a good metric in high dimensions?

1
Clustering based anomaly detection
0
Clusters as input for classification
2
Bisecting K-means using Dynamic Time Warping
3
Hierarchical clustering, linkage methods and dynamic time warping
0
how to compare different sets of time series data
10
Are time series motifs and the Matrix profile algorithm a good fit for my problem?
4
Are time series models limited in real life application and are primarily used to model the residuals of another model?
4
How to cluster non-aligned time-series with different length?