What kind of graph shows the distance between any 2 points as a measure of similarity between them?

I would like to start by saying that I have looked across several sites on the StackExchange website, and have determined this would be the best to ask my question as it regards data-visualisation techniques.

I recall attending a conference several years ago. The conveners were discussing methods of data visualisation and they showed a 2-dimensional scatter graph with each point being a country. And on this graph there was a reason why there were no units on the XY-axes.

Each point encapsulated several metrics of a country such as literacy rate, GDP per capita, HDI, mortality rate, income inequality etc and hence these metrics couldn't be condensed on a 2-D axis.

Yet, their was meaning behind these scattered points. Each point's distance to another point showed how similar they were to each other. I cannot recall the underyling method of measuring 'similarity' but I'm suppose correlation or some kind of clustering method was used.

I have attached a crude example drawn to show what I mean by this. 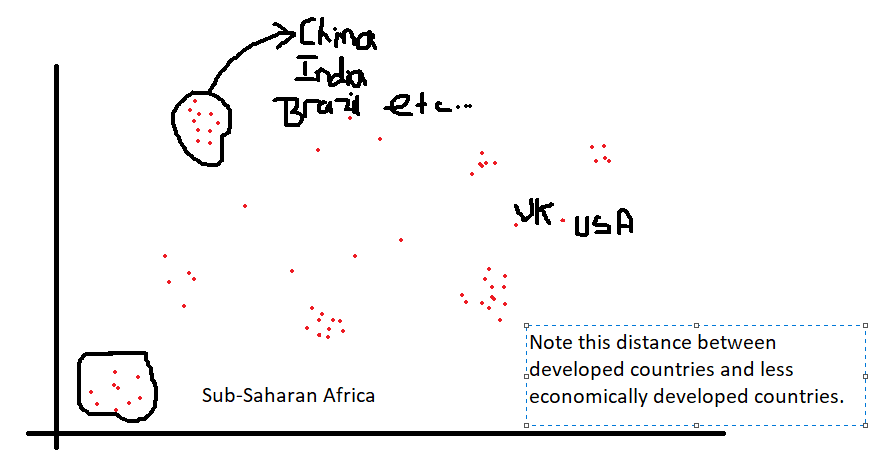 This is purely drawn crudely, but I hope this conveys the technique used and the example case as well. Countries who's Economies are similar, such as G8 nations are closer together, and those developing such as China, Brazil and India are also closer together. Yet note the visual distance between SSA countries and G8 ones. They are far apart because they are highly distinct from each other, yet closer to developing nations such as China etc.

To summarise, the distance from any given point to another given point has meaning and is a measure of their similarity. I found this kind of graphing technique really insightful and interesting, but I just cannot remember what it is called and how to implement it for other datasets and I was wondering if anyone knows.

I hope that I have explained myself clearly, I understand that this isn't as heavy of a statistics question but I feel that this is relevant to the topics defined as suitable under this site.

3
Similarity measure between two colors?
5
How to distance and to MDS-plot objects according their complex shape
0
Cluster users based on file access and application usage
11
Does Mercer's theorem work in reverse?
0
Text Similarity - Cosine - Control. Suggestion to another / better method?