How to estimate the weight of the kilo?

It seem that most of the copies gained weight relative to the kilo over time, but it seems more likely that it lost weight¹. Considering the chart below, how would one make an estimate of the weight of the International Prototype in 1989 relative to its weight in 1889? Is it as simple as assuming a Wiener process and taking the average, or are there other things to consider? 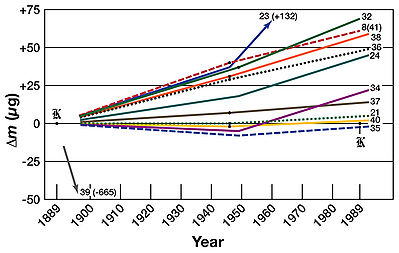 (The label numbers denote the other prototype copies, not weight.)

1: But it's also possible that it gained weight, just less so, or that it were in fact stable.

Browse other questions tagged time-series estimation stochastic-processes or ask your own question.

1
How to obtain the model behind a simulator?
5
Cointegration - Why can't I estimate a VAR on the differences?
0
Quantification of the extent of periodicity in a time series using fractal analyses
2
How to check if a series increases or decreases?
1
Regression with multiple variables and time series (in SPSS)