Ask Question
Asked 1 month ago
Active 1 month ago
Viewed 57 times
0
$\begingroup$
This question was migrated from Stack Overflow because it can be answered on Cross Validated. Migrated last month.

I have a beta regression model in R, have generated predicted (fitted) values based on my data, and plotted lines of those fitted values on a scatter plot of the actual data. I'm most used to GLMMs, and, at least in practice, have been thinking about the beta regression in a similar way.

However, the fitted values for this additive-only fixed-effects model are not creating a straight line, nor are the slopes the same between groups. I was expecting the fitted values to show the same slope, with different intercepts per group. Was that the wrong expectation? Or does this suggest there is an issue with either my data or implementation? 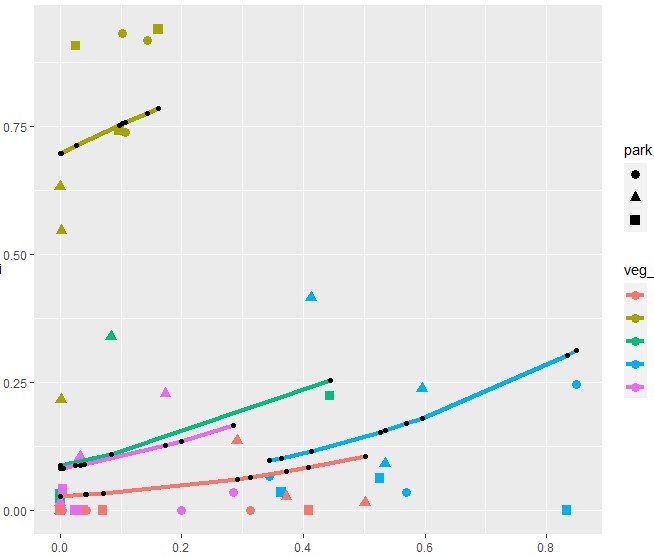 9 plots in the study (study site was once considered as a random variable, but AICc has me leaving it out), a section of the data:

Used a zero-inflated hurdle model version of the beta regression (BEINF0), as y contains zero-values (which are fairly believable as real zeros given our methods). Transforming the data and using plain BE changed the fitted values, but not the fact that slopes varied by vegetation type. Double checks with package betareg and glmmtmb give essentially the same results. Predicted values were generated by predict(MODEL, type = "response). Not specifying type, defaults to values scaled to the predictor vars (as I understand it), and indeed produce same-slope lines. But truly wacky intercepts. Fitted values put into ggplot with geom_point and geom_line (< 10 data points, catches an error for geom_smooth).

Any thoughts on what's up with these regression lines I'm plotting. The summary(MODEL) output is sensible, and I feel like that aspect of the our approach has been reasonable. Thank you!

geom_line by default produces smoothed lines within plotted points. I'd like to know if you tried the following, which can probably solve this for you:

If you don't specify that your method derives from a linear model (method = 'lm'), stat_smooth function will produce the same connect the dots line as geom_line .

On the predictor scale eta = logit(mu) you will get parallel lines against x. But on the mu scale you will get S shaped curves shifted horizontally, (but only shown for x from 0 to 1, if you limit the range for x).

Not the answer you're looking for? Browse other questions tagged r regression ggplot2 beta-regression gamlss or ask your own question.