What I want to achieve, is the ability to split this dataset back into its component sub-populations. I think some kind of GMM based clustering may be the way to do this. I've tried using the R library Mclust, but had only limited success.

If I import the data as univariate, then I get some strange classification results (for G = 2 and G = 16):

As you can see, nothing looks very Gaussian.

If I keep the indexing (or temporal information), and import as $x-y$ data, then I get some more reasonable classification, but not in the way I would expect for this kind of data: 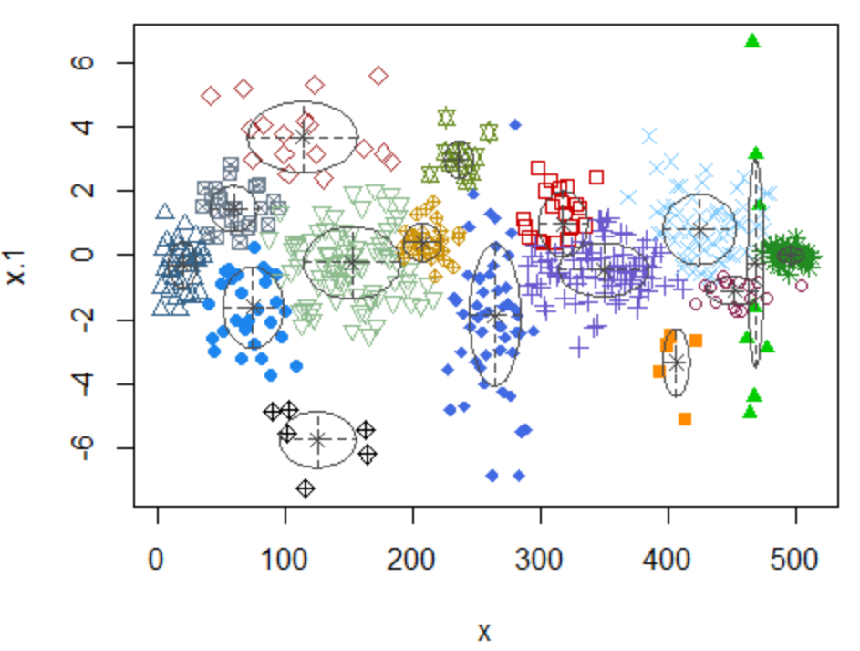 Here we can see that the clusters are being found as ellipsoids -- a consequence of the model choice and constraints. In my case I would expect/want a "rectangular" profile

I don't expect to be able to perfectly reconstruct the sub-populations, especially if they have very similar distribution properties, but I would like to find a method of decomposing the data set in an unbiased way -- i.e. remove the bias of my choice of decomposition if I were to do it manually.

If anyone can suggest a way I can achieve this, either with another R library, or another technique -- maybe my GMM approach is a dead end.

My fundamental objective is to split the data set into its constituent component sub-populations in an unbiased way.

Since it sounds like I answered your question, I'll expand a bit on my comment so that this question can hopefully be closed. GMMs are not well suited to this problem because, in the one dimensional case, they discard all temporal information and, in the two-dimensional case, they interpret the temporal information as a second dimension along which the data is randomly distributed. That's why you get round clusters in two dimensions.

What you actually want is to identify the points in time where the data generating process abruptly changes. This is called changepoint analysis. Many packages exist in R and Python. Just make sure to choose one which allows you to detect shifts in mean and variance.

Not the answer you're looking for? Browse other questions tagged r clustering gaussian-mixture-distribution or ask your own question.