Why is the t-test designed for small samples?

I've read somewhere that the t-test is designed for small samples, why is that the case? What if I use a big sample out of a population to conduct the t-test? Would that be an issue or have potential implications?

There is fundamental misconception in your question and in several of the answers you have received so far.

The choice of $t$-test or $z$-test is about the nature of the test statistic, specifically whether the variance of the sampling distribution of the sample mean is known ($z$-test) or unknown and must be estimated from the sample ($t$-test).

How well either of these tests perform for statistical inference depends on an underlying assumption that the data are realizations from a normal distribution. However, because of the central limit theorem, the larger the sample size, the more robust both of these tests will be with respect to deviations from normality, since with increasing sample size, the CLT states that the sample mean (under certain regularity conditions) will asymptotically tend toward a normal distribution.

These two things (known versus unknown variance, and the relationship between sample size and asymptotic normality) are commonly conflated in statistical practice. They are not the same thing. To illustrate:

I hope this clarifies the situation, because a LOT of people who use univariate hypothesis tests fail to get this right.

I think this is a slight mis-reading of the place where the quote came from. It is perfectly true that when he was inventing the test which bears his pseudonym Gosset was trying to solve the problem of small samples because that was what he encountered in his work. So he designed them for small samples. That historical fact does not mean they do not work for large samples.

In his original paper he outlined the problem

In routine work there are two ways of dealing with this difficulty: (1) an experiment may he repeated many times, until such a long series is obtained that the standard deviation is determined once and for all with sufficient accuracy. This value can then be used for subsequent shorter series of similar experiments.

There are other experiments, however, which cannot easily be repeated very often; in such cases it is sometimes necessary to judge of the certainty of the results from a very small sample, which itself affords the only indication of the variability. Some chemical, many biological, and most agricultural and large- scale experiments belong to this class, which has hitherto been almost outside the range of statistical inquiry.

Gosset himself was working with the brewers, Guinness, and faced the problem that he mentions in that paragraph of being unable to run large-scale repetitions and even if he could have repeated the plots many times there would almost certainly have been drift over time.

The quotes are from his 1908 article in Biometrika "The probable error of a mean" which has been widely reprinted.

The question $t$-tests vs $z$-tests? suggested by @user2974951 seems relevant but perhaps the answer there remains a bit abstract. I like to see it in this way, possibly not 100% correct, though.

With small sample sizes, it's relatively likely that one of the two samples will receive a slightly extreme datapoint that will skew its mean and make you think that there is a real difference between the two samples when instead nothing is going on. To correct for such small-size effect you allow more extreme values of the difference between samples to be relatively likely before claiming "significance of difference". I.e. the t-distribution, against which you map the value of the t-statistics to obtain the p-value, has fatter tails than the normal distribution. As the sample sizes increases, this correction becomes negligible and you don't need to worry about using Normal or T-distribution (or T-test vs Z-test).

Here's an example using simulation. We compare a treatment to a control where in fact there is no difference between to two. We simulate the data from a normal distribution, so no complications about data normality, unequal variance, etc. Since the null-hypothesis holds, by repeating the sampling and testing many times, we expect ~5% of the tests to have p < 0.05. If we use t.test this is actually the case but if we use Z-test (i.e. we don't account for small sample size) we get many more false positives. Here, the sample size is just N=3:

You can also check the distribution of pvalues noting that under the null hypothesis the distribution should be uniform (flat) between 0 and 1. This is the case for the T-test but not for the Z-test:

Short answer: When people say the t test (that is, a test based on a t distribution) is "designed" for small samples what they mean is that if you have a small sample then a t test is going to be be more accurate than a "z test" (which is based on a normal distribution). If a t test and a z test ever give you different answers (which will only happen with small sample sizes), you should prefer the t test answer. But as the sample size increases the two tests approach each other so it doesn't matter which you use.

Longer answer: The underlying logic of both of these tests is that we know that the ERRORS associated with using a random sample (rather than the whole population) are always going to to have a particular bell shaped distribution. This is true regardless of what the distribution of the variables in question looks like. If we know the shape of that distribution we can use it to figure out how likely it is that two estimates that look different really are different in the underlying population (which is what the t test is trying to figure out).

Why is the t-test designed for small samples?

Because it is the small samples where the t-test makes a difference.

For large samples the t-distribution becomes similar to the normal distribution.

What if I use a big sample out of a population to conduct the t-test? Would that be an issue or have potential implications?

No, the t-test works for both large and small samples.

The t-test is a hypothesis test that uses the difference of the observed sample mean $\bar{X}$ with the hypothesized mean $\mu$, and divides/standardizes this by the observed standard deviation. You get the test statistic $t = \frac{\bar{X}-\mu}{\hat \sigma / \sqrt{n}}$ which is not normally distributed but instead t-distributed* with degrees of freedom $\nu = n-1$ (where $n$ is the sample size). The trick of the t-test is to use this t-distribution instead of the normal distribution. 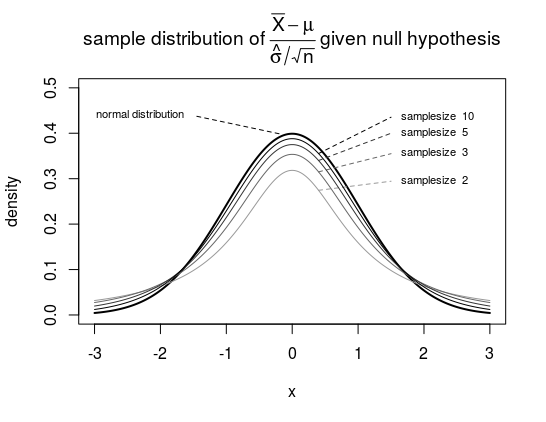 Well, the reason is simple: z-test is an approximation of the t-test and is valid under the assumption of a large sample size.

For the last 2 question the answer is: No, neither issues nor practical implications because the difference between the 2, for large sample size, is irrelevant.

Not the answer you're looking for? Browse other questions tagged hypothesis-testing t-test or ask your own question.

2
Why use a t-distribution instead of a normal distribution for small sample tests?
1
Is it valid to conduct t-tests with just 20 students?
88
Is there a minimum sample size required for the t-test to be valid?
22
Intuitive understanding of the difference between consistent and asymptotically unbiased
16
$t$-tests vs $z$-tests?
14
What's the difference between asymptotic unbiasedness and consistency?
5
What is the rationale behind using the t-distribution?
3
T-distribution versus normal distribution (sample means and linear inference)
1
Which statistical analysis should I perform if the data sets are not normally distributed?