What are "Grids" and Detection at different scales" in YOLOV3?

I've recently started working with Yolov3 and the more I go in depth, the more confused I get. In the simplest terms what I think about YOLOV3 (On 416 input, 80 classes, 3 BB) is that:

What I want to know from now here is that :

what are Grid cells? Are these pixels or slices of image?

Are there 3 different outputs predicted (one for each of the 3 layers) and total loss is calculated. If so? How is this achieved? Because we input 1 image with annotations? How would that give us Ground BB for the downscaled images?

OR Is the size same at each level? IF so, what are we up sampling?

In the end, How is the total loss calculated?

Apart from reading the original paper, I have referred to many blogs and videos but I could not get the meaning of how exactly works. Could someone please explain in simple terms of how an example would go in and get predicted.

The network used to extract features is just DarkNet-53 as stated by the author in the YOLOv3 paper:

Yes, the sizes of 13, 26 and 52, refer to the feature map dimensions at the prediction layers. These sizes are directly related to the grid cells as we are going to see in the following lines. Just a sidenote, the correct depth (number of feature maps) is 255 and not 256 (this will also be explained hereafter).

Grid cells were first explained in the original paper You Only Look Once. They are part of a regular grid (of simensions $S\times S$) into wich the input image is divided. Concretely, in YOLOv1 the author uses a grid of 7x7 cells. This is an example:

But how can this be encoded in the network?

Now, we should remember that $B=3$ bounding boxes are being predicted at each of these grid cells. These boxes are encoded as a vector of $85$ features/ dimensions $\Rightarrow$ The depth (number of feature maps) needed is $85\times B = 255$, as you said in the question.

To visualize this, first we can focus on how a certain box of a certain cell is encoded:

By doing this we end up predicting a tensor of dimensions $S\times S\times B \times 85$, which represents the output of the architecture, as commented above: 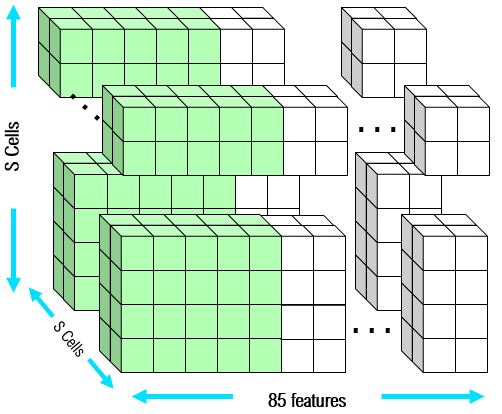 However, we are predicting 3 bounding boxes for each grid cell $\Rightarrow$ the total output is the result of concatenating three of these tensors together, making a dimensions total of $S\times S \times 85 \times 3 = S\times S \times 255$.

Moreover, as you said in the question, YOLOv3 uses three of these regular grids as outputs $\Rightarrow$ We are predicting 3 of these $S_i\times S_i \times 255$ tensors at 3 different depths of the architecture.

Predictions and training with YOLOv3 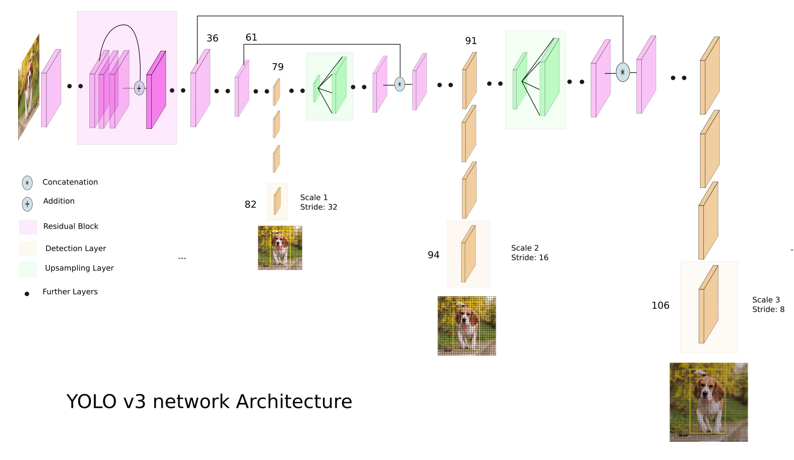 The purpose of this, is to be able of detecting smaller objects which are difficult to detect in a low resolution grid. This way, in order to detect bigger objects at he highest resolution grid, the difference w.r.t. these anchor boxes would be significant, difficulting the learning procedure of the network.

However, having a look at the label generation for VOC dataset:

Now we need to generate the label files that Darknet uses. Darknet wants a .txt file for each image with a line for each ground truth object in the image that looks like:

Where x, y, width, and height are relative to the image's width and height

This influence in learning is by backpropagation of the gradients of the 3 loss function w.r.t. the weights/ biases. One loss function for each output grid. However, note that, for example, not all the weigths/ biases will have an influence in the first and second grid loss functions.

This is because, for example, a change in the weights and biases values of one of the final layers won't affect the predictions of the first output grid $\Rightarrow$ The associated gradient will be zero.

Not the answer you're looking for? Browse other questions tagged neural-networks convolution computer-vision object-detection yolo or ask your own question.

0
Yolov- 3: How are features / detection at 3 different level arranged to give 1 final output?

5
2D convolution with depth
1
Convolutional neural network with images that have color channels
2
Understanding the YOLO algorithm
4
How are YOLO anchor boxes generated?
1
Can the dimension of a feature map in the CNN be bigger than the original image dimension?
0
Performing object detection without localization