I'm very new to this area and am having difficulty understanding the concept of rejecting the null hypothesis based upon results from the ANOVA table.

Sorry if these questions are signs of my ignorance, but I'm 57 and returning to school after a 35 year absence! Thanks for any help.

Think about if you have 2 friends who are both arguing over which one lives farther from work/school. You offer to settle the debate and ask them to measure how far they have to travel between home and work. They both report back to you, but one reports in miles and the other reports in kilometers, so you cannot compare the 2 numbers directly. You can convert the miles to kilometers or the kilometers to miles and make the comparison, which conversion you make does not matter, you will come to the same decision either way.

Alpha is chosen ahead of time (computers often default to 0.05 if you don't set it otherwise) and represents your willingness to falsely reject the null hypothesis if it is true (type I error). The F-statistic is computed from the data and represents how much the variability among the means exceeds that expected due to chance. An F-statistic greater than the critical value is equivalent to a p-value less than alpha and both mean that you reject the null hypothesis.

We don't compare the F-statistic to 1 because it can be greater than 1 due only to chance, it is only when it is greater than the critical value that we say it is unlikely to be due to chance and would rather reject the null hypothesis.

In the classes that I teach I have found that the students who are not quite as young as the others and are returning to school after working for a while often ask the best questions and are more interested in what they can actually do with the answers (rather than just worrying if it is on the test), so don't be afraid to ask.

I had read the post you recommended, however I felt that it had got a problem and I still don't understand. I captured its content and attached as an image bellow. Could you help to explain it clearly? 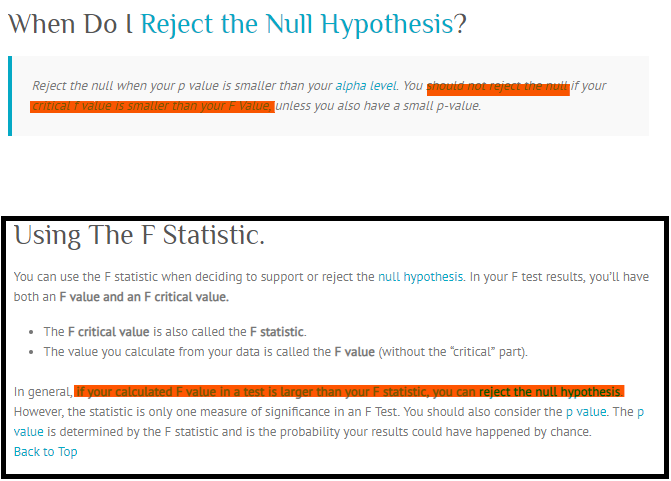 Not the answer you're looking for? Browse other questions tagged anova or ask your own question.

45
How to interpret F- and p-value in ANOVA?
6
How to find P(X > F) in ANOVA F-test?
13
How to compute confidence interval in ANOVA with repeated measures?
0
How to test difference from 50%
1
P-Value in Shapiro-Wilk test
2
Unclear if my p-value from my ANOVA analysis makes sense