How to estimate the change of rate of COVID-19 infections when accounting for vaccine effectiveness and increased transmissibility of mutated strains?

The world has reasonably accurate numbers of the transmissibility of the strains of COVID-19 that have ravaged humankind.

What is the correct way to take into account those two changes when projecting case rates?

For example, if you have a vaccine that is 80% efficacious against a new strain, but that new strain is 80% more transmissible than the original strain (and that new strain becomes dominant, which is scientifically most likely), what is the estimated net outcome in case rates (removing other variables)? Is it zero? To keep things simple, let us assume that the new strain will account for all new cases.

As another example, with the same conditions and removal of variables as above, if the vaccine is 65% efficacious against the new strain, but that new strain is 80% more transmissible than the original strain, what is the estimated net outcome in case rates?

You are not gonna get an answer

Exactly predicting the influence of effects such as mutated strains is extremely difficult. Even governments with lot's of mathematicians and big computers working for them are not well capable of making good predictions (or even bad predictions).

You are gonna get an answer

Intuition of the mechanics by means of a game

If your goal with this question is just to gain some insight into the underlying theoretical considerations then you might get some improvements in your intuition.

In this part of the question, I am gonna give some intuition by replacing viruses with dice. I am actually currently making a board game that includes the aspect of virus mutations, and now even my 5-year-old son "understands" the aspects of the mechanics and aspects of probability for an epidemic. 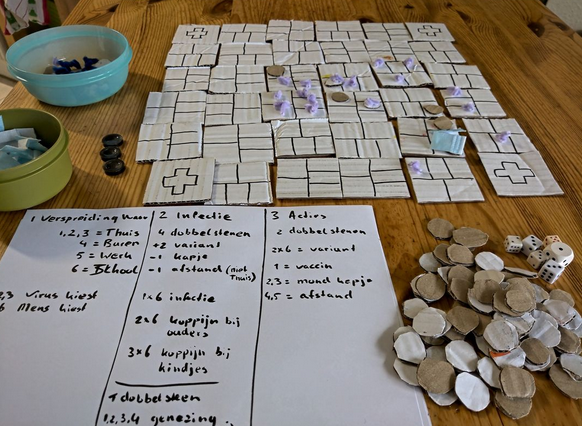 The game mimics transmission by rolling several dice. When you roll a six then an infection occurs. When you roll 2/3 or more sixes then the newly infected person gets a headache as well (2 when it's an adult, 3 for kids).

Let's see what the probability is for rolling at least 1 six. 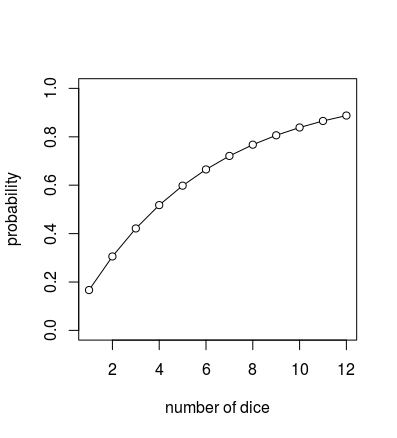 In this game, the virus variant will increase the number of dice used in the infection by 'two dice' (in a real-world the variant might also increase the rate of infection, the viral load, in some way).

Already for this very basic game, it is very difficult to compute the effect of the variant (the two extra dice). There are several ways in which the effect of higher infectivity will have different effects that vary due to inhomogeneities.

Those figures eventually are just based on an estimated/observed growth rate that is rescaled to express the reproduction scale.

The effect of a virus mutant is not easily determined.

Let alone that the effect can be predicted/extrapolated. But what people (politicians and media) do is just extrapolate the observed effects of the mutant to other populations (without considering the mechanics and the idea that the effects may be different for different situations).

For example, in South East England scientists observe some increase of a variant. Subsequently, it became the dominant strain in London.

Then people start to use the same figures (like R value increases such and such) and plug it into their own simple model as if this effect on the surface (a particular increase of the R value) is gonna be exactly the same.

I believe that this is not the right way to handle the lack of information. The correct way is to gather more/richer/better data (and that is what people did afterward, and they found in many other places that the variant is not as strongly fast-spreading, or sometimes they found no effect at all.).

a vaccine that is 80% efficacious against a new strain, but that new strain is 80% more transmissible

what is the estimated net outcome in case rates

Typically the vaccine/immunity is gonna have more effect.

So vaccination is gonna reduce that number $S$ and mutations are gonna increase $R_0$. However, the number $R_0$ does not increase linearly with an increase of transmissibility, it will be less.

Not the answer you're looking for? Browse other questions tagged estimation interaction epidemiology disease epidemic-curve or ask your own question.

9
Why is $R_t$ (or $R_0$) and not doubling rate or time the go-to metric for measuring Covid-19 expansion?
9
Is there a way to calculate the riskiest places to be infected by COVID-19?

1
Accounting for denominator in Poisson rate regression model with identity link and categorical predictors
7
How could one (tentatively) estimate the actual number of COVID-19 infections in an area, using hard data like age-adjusted death rate?
8
How to correctly analyze fatality rate and daily deaths of Chinese and Italian COVID-19 outbreak?
1
How to calculate the doubling rate for infections?
1
How to calculate 14-day trends in COVID-19 infections and deaths in US States?
2
How to estimate mean and variance for rate of change when I only have state data at different ages
9
Why is $R_t$ (or $R_0$) and not doubling rate or time the go-to metric for measuring Covid-19 expansion?