I have a question on how to use ML (machine learning) methods for the following task. I have a m-dimensional (field is always over real numbers $R$) input vector $\vec{x}$, and I want to learn the output function $f$ which is associated with the input vector as follows:

$f_{\vec{x}}$ takes a scalar as input (from a finite range) and outputs a scalar (for notational convenience, I'll omit the subscript):

So my question is, how can I do this in the best way possible? I'd like to use (possibly deep) neural networks, but I am also open for other architectures. My first approach was to use a fully-connected neural net with ReLU activation function, and simply discretize uniformly $f(\zeta) \approx f_i := f(\zeta_i)$, but that did not bring good results. Presumably, due to the following reasons:

Thus, I was thinking that I should rather learn the coefficients in a different space. I anticipate that e.g. Fourier space would work well, since the basis is orthonormal (thus not correlated) and I can specify my domain knowledge (highest harmonic order / correlation length).

Would a different approach, e.g. a different representation or a different network architecture, work better? Or should I use something else than (standard feed-forward) neural networks? I'd be very happy to hear your feedback. Thank you.

Since my original question unfortunately caused confusion, I want to point out the following:

As a toy example and for demonstrational purposes (to show you, that a naive approach does not work), I did the following: 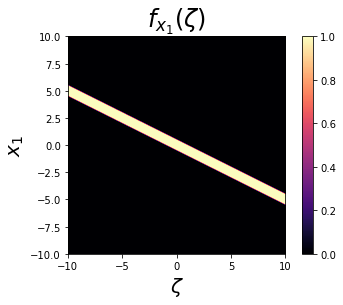 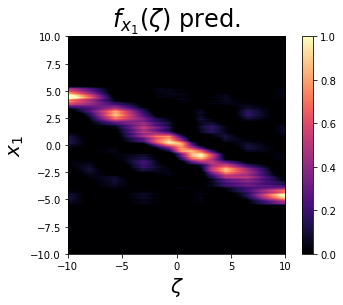 As you can see, the network learns something similar, but it has terrible accuracy considering that the output function is trivial. A different choice of the hyperparameters does not increase accuracy significantly. Of course, it also helped that the sampling was extremely narrow (this is not possible in my application), and that the input dimensionality was the lowest possible.

I hope that this clarifies my question and demonstrates my motivation for a different approach for this type of problem.

12
Can a neural network learn a functional, and its functional derivative?
1
Neural network: two output vectors?
14
What is the intuition behind a Long Short Term Memory (LSTM) recurrent neural network?
6
Why do Deep Learning libraries force the cost function to output a scalar?
0
If softmax is used as an activation function for output layer, must the number of nodes in the last hidden layer equal the number of output nodes?
0
neural networks: can the activation of a neuron be thought of as a sort of angle between input and neuron?
2
Machine learning methods for multi-dimensional input and output
0
Can a neural network learned function $f$ be used for calculating its derivate $f'$?
3
Can this network learn the XOR function?
1
Can a Single Layer Perceptron Learn a Nonlinear Function?