Why is this linear mixed model singular?

I'm trying to understand why I get a singular fit when a linear mixed-effect model is fitted to the data below.

I used R lme4::lmer and the model is very simple having only the intercept as fixed effect and a factor variable as random.

Here's the dataset (can be copy & pasted to R)

This is the fitted model:

Help for isSingular says that some "dimensions" of the variance-covariance matrix have been estimated as exactly zero and I'd like to see in the data why this is happening.

As you have discovered, this happens when one of the variance components is estimated as zero. This typically has one of two explanations:

Obviously the first scenario is not the case with your data, since you only have random intercepts.

So it is likely that the actual variation of the random intercepts for group_id is very close to zero. If it is, then with only 5 groups, the software may not be able to estimate a variance above zero.

A good place to start if by plotting the data: 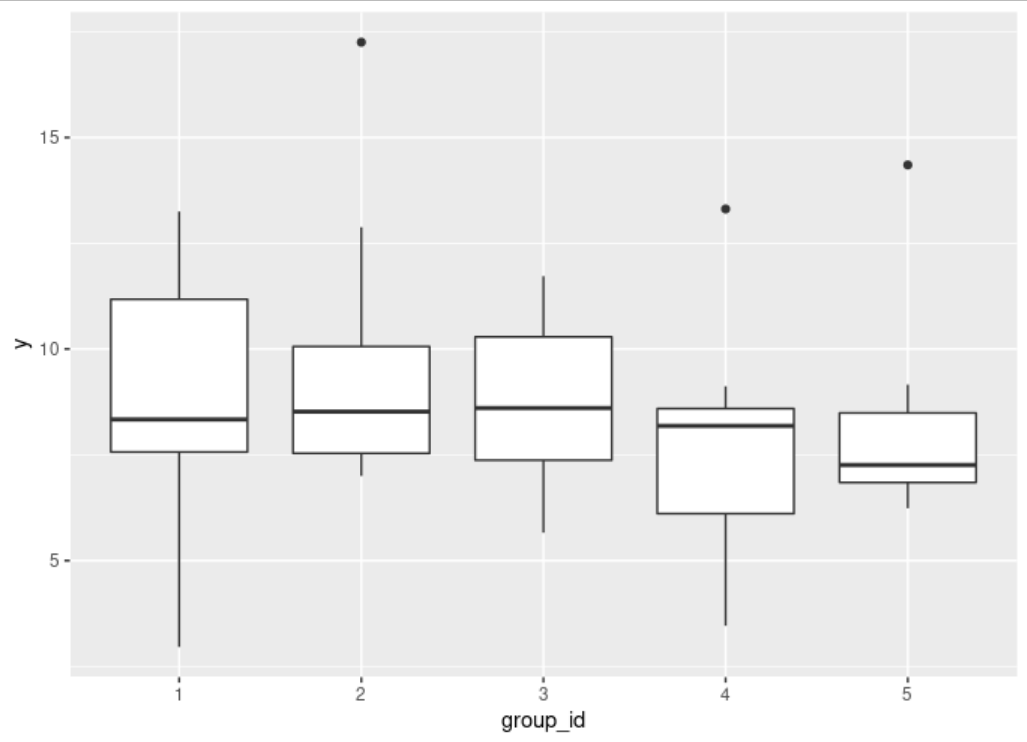 We can investigate this more formally three ways (at least):

First, let us look at the means of the data in each group:

Note that there is fairly small variation among all the groups, but note that the mean of group 1 and 3 is almost identical. Let us remove group 1 and see what happens:

So the model converges without singularity, but the variance component for group_id is very small, as we suspected.

Next, we can add some additional variance to the group_id component. The problem with doing this is that with only 5 groups, if we were to sample 5 observations from, say rnorm(5, 0, 1) (with a standard deviation of 1) the sample standard deviation is likely to be not close to 1 and the mean is likely to be not close to zero. A good approach to solve this is to use monte-carlo simulation (basically just do it many times and take averages).

Here we will do 100 simulations:

So we have added random noise to the groups with a variance of 1. The monte carlo estimates are:

Lastly, let us look at a model without random effects, which will obviously simply be an ANOVA:

So there is very little evidence that the means of the 5 groups are different from each other. Another way to look at this is with:

So there is also very little evidence that groups 2, 3, 4, and 5 have different means from group 1. Both these models are consistent with there being very small variation of the random intercepts in the mixed model.

So, to sum up, in this case we can conclude that due to a combination of the small number of groups and the estimated variation between groups being small, the software is unable to estimate the random intercepts variation above zero, and hence the model is singular, although the model estimates seem to be reliable.

Not the answer you're looking for? Browse other questions tagged r mixed-model lme4-nlme random-effects-model singular or ask your own question.

2
singular fit in lmer, despite no high correlations of random effects
4
Linear Mixed Model equation (as of lme4 package)
2
How to model this mixed model
2
Singular fit for a mixed-effects model with crossed design
2
Help me build a linear mixed model in R using this structure
3
boundary (singular) fit: see ?isSingular