Paired and repeated measures! Now what? ANOVA or mixed model?

I have a simple setup. I have 10 patients and I would like to test the effect of a certain drug on kidney function. Each patient will serve as his own control and intervention.

Then once the intervention is introduced, the left and right kidney function of each patient is measured again.

In order to determine the effect drug, I am looking for significant differences between the intervention and control measures. 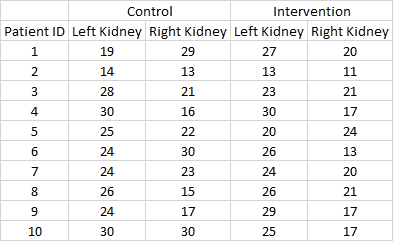 The values in the table above are fictitious and are meant to provide clarity.

I could take the average of the left and right kidney functions, before and after the intervention. Then I would just have 10 paired observations, and I could carry out a simple paired samples t test.

Is there another way I could find significant differences without averaging or throwing away data? I would like to keep these repeated measures. Is there a way I can take their dependency into account?

I've looked up repeated measure ANOVA, but I'm not sure if that's what I need. Do I need to use a linear mixed effect model?

This is basically an analysis of change model.

2 measurements on each subject were taken at baseline, and 2 more at follow-up. I will refrain from calling this "control" and "intervention" as that could be somewhat misleading.

In order to fit this model, it is necessary to "reshape" the data as follows:

The estimate for time will answer the research question: What is the change in measure associated with the intervention, while controlling for the repeated measures within patients, and within the same kidney's of each patient.

Another approach is to fit nested random effects, and treat LR as a random factor:

Not the answer you're looking for? Browse other questions tagged hypothesis-testing mixed-model anova repeated-measures paired-data or ask your own question.