Is it valid to conduct t-tests with just 20 students? [duplicate]

By reading article I think I found a bug:

Seams to me that 20 is a very small number of samples in this article assuming 20 students are taken random and the order of students is not important. I read and it looks to me this question is super important but not treated with great care since it can be a reference to basically any sampling question.

Suppose $Y_i$ are as sampled in R below:

A stripchart shows that the mean $\bar Y = 5.2$ is not only larger than $0$ but perhaps convincingly larger in terms of the variability of the 20 differences.

In this one instance, a t test based on $n = 20$ observations from a normal population with $\mu$ one standard deviation $\sigma$ above $0$ seems to have plenty of power to detect that $\mu > 0.$

The particular sample above was not extraordinary in this regard, as the brief simulation below in R shows. About 99% of t tests on such data will reject $H_0;$ the power of the t test in these circumstances is about 99%.

Here are results from a formal 'power and sample size' procedure in Minitab. (There is an R library that does such computations for a variety of commonly used tests, many kinds of statistical software have similar procedures, and there are web sites with reliable 'calculators'.) The accompanying power curve, shows useful power even for differences as small as $3.$ 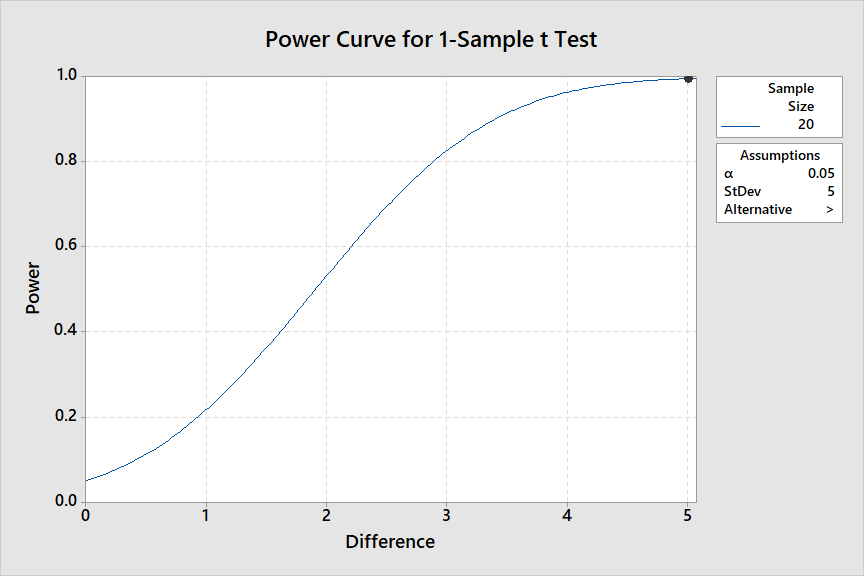 However, it is hardly a surprise that the following sample does not happen to lead to rejection of $H_0.$

Speaking more technically, the power of a t test can be computed using a noncentral t distribution as discussed here.

Not the answer you're looking for? Browse other questions tagged t-test sampling or ask your own question.

131
How to choose between t-test or non-parametric test e.g. Wilcoxon in small samples
10
Why is the t-test designed for small samples?
47
What references should be cited to support using 30 as a large enough sample size?
8
How to estimate $P(x\le0)$ from $n$ samples of $x$?
4
Calculate the power of a paired t-test in R manually
5
Minimum sample size required in paired t-tests and statistic significance

2
What should I do while designing stratified cluster randomized sampling survey if cluster size is large/smaller than I expect?
32
Strategies for teaching the sampling distribution
5
How to deal with non random samples?
0
Random sampling distribution question
4
Why is it useful to sample probability distributions models?
2
confidence interval for population parameters
2
Rejection sampling confusion
1
How to efficiently bias future samples?