I have a basic question about the root-mean-square error (RMSE). I have a prediction using an ARIMA model. I predicted a time series and use a rolling-horizon approach with overlapping or non-overlapping prediction horizons.

For simplicity let's just say we have not overlapping prediction horizons and I calculate forecasted values from a time series with 30 entries having a prediction horizon of 10. This means that I have 2 iterations:

Here is my R code for calculating both the total RMSE and the RMSE of the single prediction iterations.

Can anyone say something about these issues? I'd appreciate every comment.

What do you usually do when evaluating a prediction of time series? Do you calculate the total RMSE or the average of the different perdiction interations?

Does nobody have an idea about that? Have you never used the RMSE to evaluate prediction results?

Hello while I can not show you my code, as it is confidential due to company legal agreement, I developed a Genetic Time Series fitting VAR in levels, VECM, and VAR in differences and doing a kmeans cluster analysis afterwards for narrowing down solution space for the Genetic Algorithm, as you can run my tool with an overall search grid for all features and parameters, and then use insights from the kmean to adjust the params of every single feature. I worked 4-5 months on it and I can say that I swallowed a lot of theory and coding strategy e.g. syntactic sugar and how to save chromosome solutions of the GA, which hold the solutions for all VAR submodels.

So I have some experience. Maybe it would be better to go to chat if you want to know more in detail.

I have non overlapping windows, as i do a rolling forecast with a window-size only of one that rolls forward 52 weeks but one week at a time. So we have a 52 weeks forecast which is originally a 1 week fit, as the shortest window guarantees the best fit. This is our strategy to mimic a one year forecast.

Imho, the RMSE is limited in its answers. For business implications you'll need R² and MAPE/MAE, with train/test split, as the RMSE is useless for other stakeholders. I myself would stick also to the MASE of Rob Hyndman, as it can also tell you the fit of a time series that can drop to zero (intermittent demand time series). And the MASE tells you if your forecasting method is better than the most naive forecast there is, in other words, this week equals last week.

I can not tell you anything about your RMSE questions, but it belongs to the point of view. I mostly work in the area of media/ads/ad awareness kpi sales, and no one would understand rmse. So I develop models, that everyone can get into.

As the OP asked of a more general matter, I updated my question:

Dear Peter, that is an excellent question and indeed it depends more on the nature of your data points. And I'll give you an excerpt from my forecasting tool in the shape of an output matrix to answer this question.

First lets get some terminology:

-when im talking about window size, i mean reevaluating data or making the training set bigger at each iteration. The iteration is determined by the forecast period. e.g. 52 weeks measn 52 iterations of window size 1

-when im talking about nahead i mean how many windows you want to forecast at once despite your refitting. it is possible to forecast e.g. 2 windows although you are only incorporating information of only window1.

-when we are observing every iteration we normally speak of APE! Absolute Prediction Error, MAPE Only if there are more than two observations to have the mean of them.

That means you get RMSE/MAPe in dependence of window size (also knowns as crossvalidation of time series https://otexts.com/fpp2/accuracy.html) and forecasting period. The red dots are the windows.

we have a look at that matter before dealing with the cross validation. In theory, the best forecast we can get, is the shortest, thus: If your data is of 99 time periods or of 1000 a forecast of only t would result in better results in theory: Also look here, why we are normally not doing something on the whole time series: https://www.youtube.com/watch?v=kgBDQ3baESw

But as you can see from my data an n.ahead t + 1 could be sometimes better at V6 and V7. Because the time series at V4 thinks we may get a rising value due to 8696 which is not the case (8094), resulting in bad predictions for V5 but better predictions for V6, since we have a two window prediction, the V7 prediction for V6 is better since we now incorporate the falling trend of 8094(V5, original) in the train set of (results in 7870 which is better for the falling trend of 7371. The quintessence is, that it is dependent of the datapoints.

I always talked about incorporating, because in theory I still revalidate my model at every prediction with a window size of 1. Although sometimes a 2 window size reevalutaion would be better. But I'm talking about a big automation process, It would be easy to implement and to look at which is the better forecast for a varying of windows.

Now lets have a look at your questions:

The question for me is more about do you want to forecast the 2 periods at once or step by step. Because this mainly influence the MAPE APE as you can see from my data.

You can do both, and more: But it should not end up like in the video, thus: 1.) You can calculate the difference between observed and predicted value in every iteration just as in the matrix. Then you can calculate a MAPE over your whole prediction/observations. This results in a forecast, refitted or reevaluated at a window size of 1!!!!! and a forecasting period of 2 periods, since you have two values. Although you might get 2 RMSE APE at the first and second observation we ignore the first, it is incorporated in the overall fit.

2.) You can also forecast 2 weeks ahead with a window size of 1 that would result in an average forecast window as you can do something like this:

But that would also result in one RMSE or MAPE.

As you can see from my data, I have RMSE at every point, but I'm interested in the overall fit, when using a specific window size (1) and forecasting period (1 or 2). So when you are giving one RMSE you always tell the window size, and n.ahead (or t + n ) at which the data was measured imho. If your n.ahead and window size is greater than 1 e.g. 2 Than I would tell both RMSE.

Further I would like to know if the total MAPE/MAE/MSE in this case would be equal to the average MAPE/MAE/MSE of the individual prediction iterations?

And from what we have seen, you can derive that the avg should normally not be the same. See Image: If there is still something I got wrong, please tell me, because I invested nearly over an hour to get all together ^^ 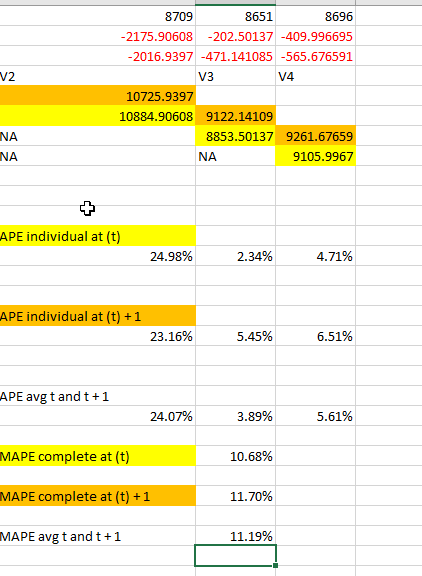 I'm answering the quesions of the OP as it seems I had not not thoroughly reasoned my answer (which is correct), thus Np Peter I'm here to clarify everything.

2.) to understand the size of my data you have to remember window size is not the forecasting period of 2. Window size comes from cross validation in time series and it means, window size is the size of the sliding window, thus if my data consist of 152 e.g. I would start at 100 weeks training data and forecast week nr. 101 and 102 (forecast 2), then with window size == 1 in the next iteration I have 101 training data with window size == 1, I forecast 102 and 103, and so on. Thus I got 2 APEs, but I only use one (However it would be possible to use both and I would get a MAPE of two weeks forecast 2). Although it seems I have overlapping windows, I only use the actual forecast of the curent week. 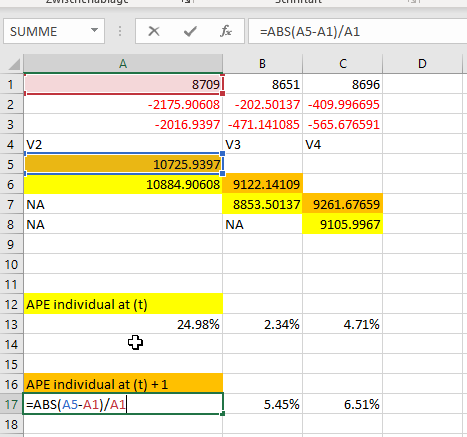 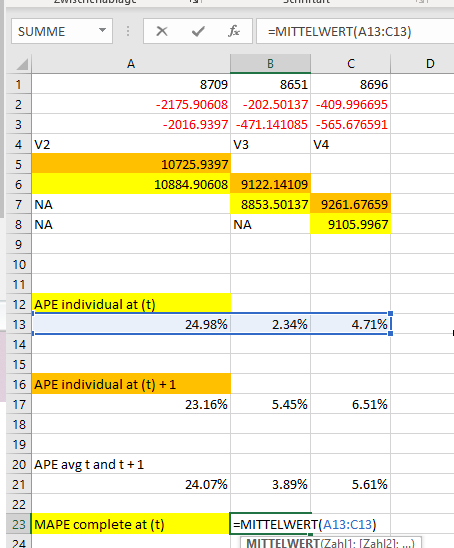 You find all the values in the matrix.

Averaging errors over different forecast horizons makes no sense in my opinion.

Thus, I think you need to study and present MSE as a curve over the forecast horizons $h$: $$MSE(h)=1/T\sum_t[\hat y(t+h|I_t)-y(t+h)]^2$$ You may be better at forecasting long horizons rather than short ones, for instance.

The procedure can be visualized as a table with rows representing $t$ - the last actual used for a forecast, and columns representing $t+h$ - the time period for which forecast is produced. In this case the forecast horizons $h$ are diagonals of the upper triagonal matrix. You average along these diagonals. You'll have as many MSE(h) as you have diagonals.

Not the answer you're looking for? Browse other questions tagged forecasting arima rms moving-window rolling-window or ask your own question.

3
Prediction or forecast error
2
How to interpret MASE for longer horizon forecasts?
6
"ARIMA" versus "ARMA on differenced data" gives different prediction interval
3
How do the forecast intervals from an AR model behave when the time series is inherently stationary?
2
What is the relationship between average of a rolling intercept and the intercept from a regression over the entire period?
0
Rolling autocorrelation vs whole series autocorrelation
1
Evaluating a multi-step forecasting model?
1
ARIMA accuracy measures, rolling forecast
1
Lag selection and model instability for ARIMA-GARCH in rolling windows for forecasting